Overnight swaps are pricing in a mere 20.5 percent chance that the June RBNZ meeting this Wednesday at 2:00 GMT will reveal a 25 basis point cut to the central bank’s policy interest rate.Low rate cut expectations for tomorrow are likely driven largely by the relatively upbeat trade balance data report released on Monday and considering the RBNZ just cut rates at its last meeting back in May.

Although rate traders are expecting the RBNZ to leave its overnight cash rate (OCR) unchanged at 1.5 percent, elevated readings on New Zealand Dollar implied volatility measures suggest that tomorrow’s monetary policy update will largely impact the anticipation of another rate move at the August 6 meeting. 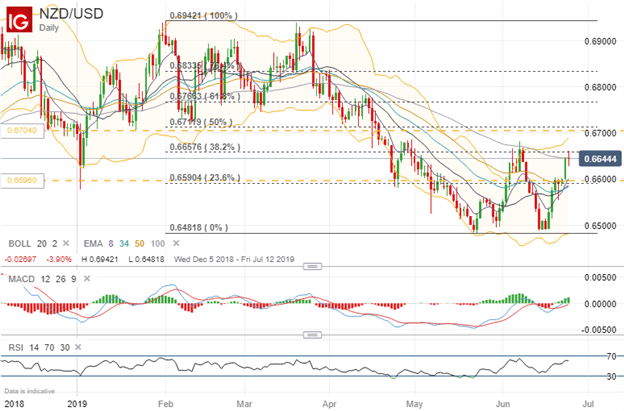 Judging by NZD/USD overnight implied volatility of 15.6 percent, which is the highest reading since May 7, the currency pair is estimated to fluctuate within a 1-standard deviation trading band between 0.6596 and 0.6704. The calculated lower and upper barriers of the 109-pip range surrounding spot NZD/USD closely aligns with the 23.6 percent and 50.0 percent retracement levels of the 2019 trading range.

If the RBNZ and Governor Orr take a relatively hawkish stance on Wednesday, markets could begin to reducing bets that the central bank cuts again in August which will likely boost the kiwi and threatens to push spot NSD/USD toward the 0.67 handle. Although, upside must first overcome technical resistance posed by the 38.2 percent Fibonacci retracement. Conversely, if the RBNZ and Governor Orr choose to tee up a near-certain rate cut in August with dovish language tomorrow, it is probable that the New Zealand Dollar will swoon in response. In this case, NZD/USD threatens to push lower towards support around the psychologically-significant 0.6600 price level. 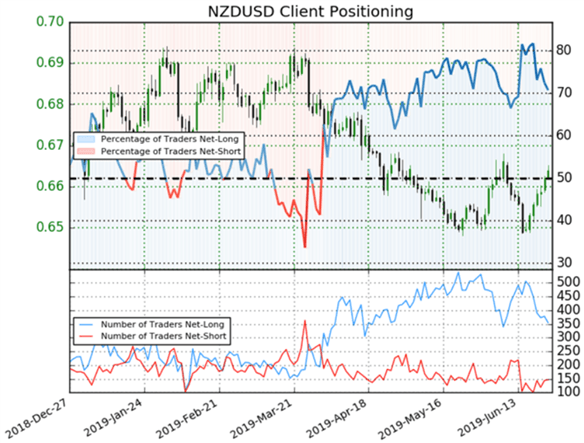 Check out IG’s Client Sentiment here for more detail on the bullish and bearish biases of EUR/USD, GBP/USD, USD/JPY, Gold, Bitcoin and S&P500.

According to IG Client Sentiment data, 70.7 percent of retail traders are net-long spot NZD/USD resulting in a long-to-short ratio of 2.41. Yet, relative to last week, the number of traders net-long is 31.0 percent lower while the number of traders net-short is 7.3 percent higher. As retail trader positioning data is generally interpreted with a contrarian lens, recent changes in spot NZD/USD positioning could hint that the New Zealand Dollar’s climb since June 14 may soon reverse lower. Sign up for a live webinar on IG Client Sentiment hosted by DailyFX analysts for additional information on interpreting trader positioning data and incorporating it into a trading strategy.