As Fed Chairman Jerome Powell is due to speak later this afternoon about the economic outlook and US monetary policy, investors will be looking for any information regarding the size of the rate cut, if any, to happen in July’s meeting. Commentary from last week’s meeting indicated a change in the Fed’s stance as it dropped its “let’s be patient and see what happens” approach to become more “we will act as appropriate to sustain economic expansion”, confirming investor’s concerns about the outlook of the US economy and sending the dollar in a downward spiral. Markets are now pricing in a near 100% chance that rates will be cut by at least 25 basis points next month as many were expecting the cut to have happened already in the rate decision that took place last week. 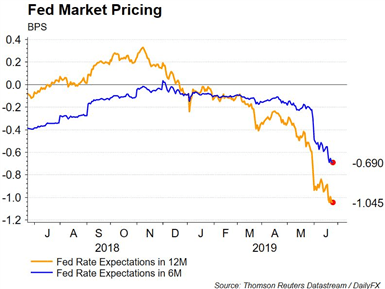 The decision to keep rates unchanged in the June meeting was not unanimous as Fed President James Bullard voted to reduce the rate for a final vote of 9 to 1. It is not much of a surprise that he voted in favour of reducing rates as he had already mentioned at a meeting on June 3 that rates cuts were to be “warranted soon” because of increased trade war risk, slowing global growth and sluggish inflation. And he may no longer be the only one to vote in favour of reducing rates next month, as Governor Lael Brainard suggested on Friday that she would support a reduction in rates to guard the economy against the downside risks it faces. Despite being a non-voting member Neel Kashkari could have significant influence at the next meeting as he stands as one of the more dovish members of the Fed together with Mr. Bullard. It is reported that he suggested a 50 basis point cut at last week’s meeting as he believes that an aggressive policy needs to be in place in order to “re-anchor” inflation expectations and tackle stagnant growth and inverted yield curves.

And more hawkish members of the FOMC may be losing a leg to stand on as economic conditions are only getting tougher for the US. In last week’s meeting the Fed pointed out that economic activity was rising at a moderate rate, which differs from the solid rate mentioned in the May meeting. Both the manufacturing and services industries are slowing as both figures are very close to the 50 line that marks a contraction in the industry, and although the jobs market remains strong, job and wage growth are slowing, and inflation remains below the 2% target.

But others within the FOMC still remain tilted towards the neutral “wait and see” stance as they believe that it is too soon to gauge how trade wars and growth uncertainty will affect the US economy. At the front of this group is Dallas Federal Reserve Bank President Robert Kaplan who has re-iterated that the Fed must wait and see what happens before making any decisions on rate changes. He believes that inflation will organically increase in the next 12 months as a stronger jobs market and increase in wages will push inflation higher despite the downward pressure on prices.

Central Banks’ power to influence the markets are diminishing

But there is no guarantee that rates will be cut at all this year as some suggest that the possible rate cuts hinted by the Fed last week could come in 2020 rather than 2019. The direction the FOMC takes in July’s meeting will be highly dependant on the outcome of Sino-American trade wars, as there is still hope that advancements could be made at the G-20 meeting in Osaka held on Friday. If we see a positive outcome, or even a trade deal, rates may not be cut at all in the near future as the Fed would rather allow the market to rebalance themselves before intervening. Of course, inflation and economic activity figures that will be released before the next meeting will be and important factor that the FOMC will be considering when deciding whether to change rates, but it seems that Donald Trump and Xi Jinping’s power to influence Central Bank monetary policies are only increasing.

Regardless of whether rates are changed or not the USD faces a difficult time as most outcomes will increase the downward pressure on the currency. If the FOMC members, including Mr. Powell at his speech this afternoon, turn further dovish and increase the chances of rate cuts in the near future the Dollar will suffer because it will confirm concerns about the state of the US economy and its future outlook. If commentaries from Fed members provide no future guidance about a rate change in July the Dollar will remain subdued to the uncertainty surrounding the future of the economy which will continue to drag it down against other major currencies, especially if no trade deal is reached this week and hopes of an end of trade disruption are diminished.