Asia Pacific stock indexes were all in the red Tuesday as investors looked with clear trepidation toward a meeting between Donald Trump and Xi Jinping at this week’s Group of 20 summit in Osaka.

China’s Commerce Ministry issued a statement saying that the country’s Vice Premier Liu He had had a call with US Treasury Secretary Mnuchin, discussing trade and agreeing to keep talking. This doesn’t seem to have been enough for equity investors, however.

The US Dollar remained mired by the prospect of lower domestic interest rates, while perceived havens such the Swiss Franc and Gold both ticked higher. The New Zealand and Australian Dollars gained, with AUD/USD approaching its June highs.

The pair has also nudged above its short-term downtrend, even if it has yet to consolidate its position North of that line. 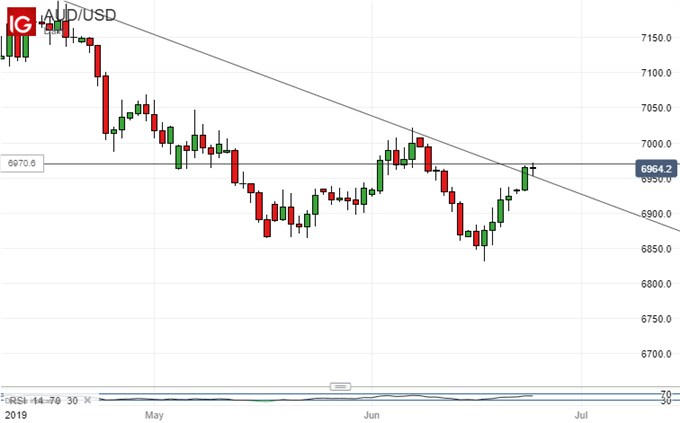 Even if it can, the Aussie will still be very much within the downtrend channel which has held since early 2018, but recent commentary from the Reserve Bank of Australia has cast some doubt on the prospect of deep rate cuts.

Meanwhile NZD/USD also gained, despite the proximity of a monetary policy meeting of the Reserve Bank of New Zealand on Wednesday. The central bank is not expected to alter any of its settings this month, but it is expected to sound a dovish note for the near future.

Crude oil prices found initial support from tensions between the US and Iran, with the latter applying new sanctions on Monday. However, they did slip back through the Asian session.