Currency traders will likely hone in on high-impact economic data releases out of the United States and Eurozone this week while awaiting the long-anticipated G20 summit in Osaka, Japan which kicks off on Friday. Due to rising uncertainty surrounding global growth, central bank policy and trade relations between the US and China, it is not surprising that implied volatility readings for EURUSD, AUDJPY and USDCNH have similarly ticked higher. 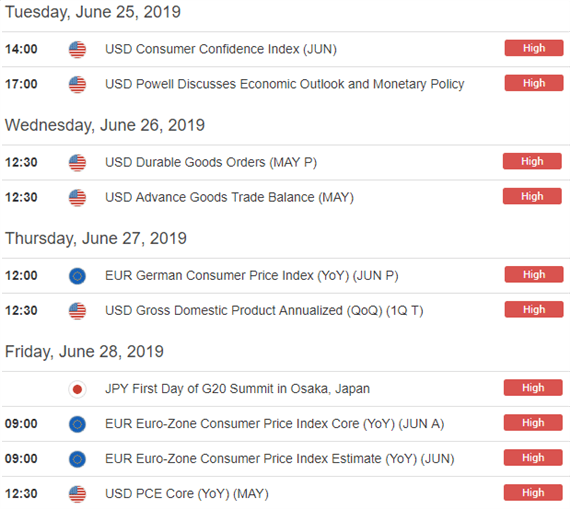 Visit the DailyFX Economic Calendarfor a comprehensive list of upcoming events and data releases for major currencies and markets which is updated in real-time with actual, estimated, and prior economic indicator readings.

Tuesday’s trading session will provide markets with the first take from Fed Chair Jerome Powell since the June FOMC statement released last week. Commentary from Powell may provide further insight on the Fed’s latest dovish leaning and when the central bank might begin to ease monetary policy. Prior to Powell taking the spotlight on Tuesday at 17:00 GMT, the US Consumer Confidence Index will be released at 14:00 GMT which looks to reveal an assessment of current business and labor market conditions as well as consumer expectations about the future. This report, along with Wednesday’s release of durable goods orders and advance goods trade balance data, has potential to weigh in on the market’s expectations for the Fed to cut rates this year which will undoubtedly impact the US Dollar. 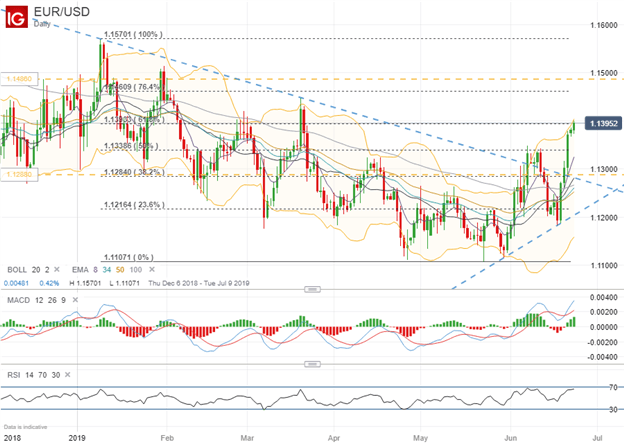 Also on the economic data front, Eurozone and US inflation measures will be released on Friday at 9:00 GMT and 12:30 GMT respectively. As such, spot EURUSD risks experiencing heightened price action over the near-term which is also suggested by the jump in EURUSD implied volatility. Judging by the 1-week implied volatility of 6.27 percent, spot EURUSD is estimated to trade between 1.1486-1.1288 with a 68 percent statistical probability.

If recent trend in Eurozone and US economic data continues, EURUSD has potential to keep climbing higher – particularly if technical resistance from the 61.8 percent Fibonacci retracement of its year-to-date high and low can be overcome. Conversely, upbeat data out of the United States threatens to derail lofty Fed rate cut bets and bolster the greenback relative to the Euro. In this scenario, spot EURUSD could slide back towards major confluence around the 1.13 handle where the currency pair may find support from the 38.2 percent Fib. 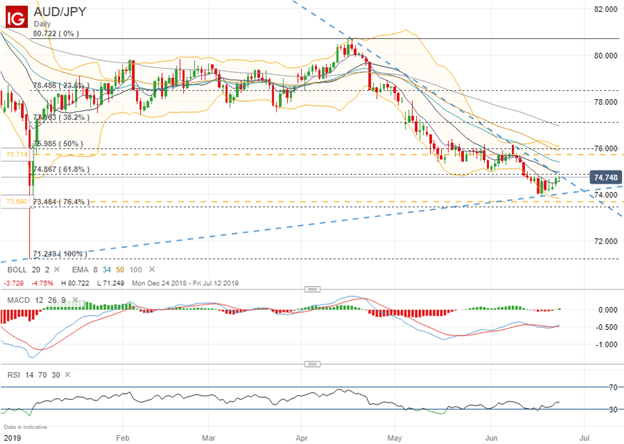 Despite a relatively quiet Economic Calendar for Australia and Japan, spot AUDJPY looks set to form its next leg after consolidating over the last 10 days. While price action in AUDJPY may take cue from the high-impact economic readings elsewhere, market expectations surrounding the start of the G20 summit largely threatens to largely overshadow the hard data. That being said, spot AUDJPY might be expected to fluctuate within a 1-standard deviation trading band of 73.690 and 75.714 calculated using its 1-week implied volatility reading of 9.78 percent – the highest reading since May 15.

Recent commentary from RBA Governor Lowe questioning the limitations of looser monetary policy looks to keep the Australian Dollar bid, but lingering anti-risk sentiment threatens to be reignited if traders lack optimism over the Trump-Xi meeting at the upcoming G20 summit which could send spot AUDJPY swooning. 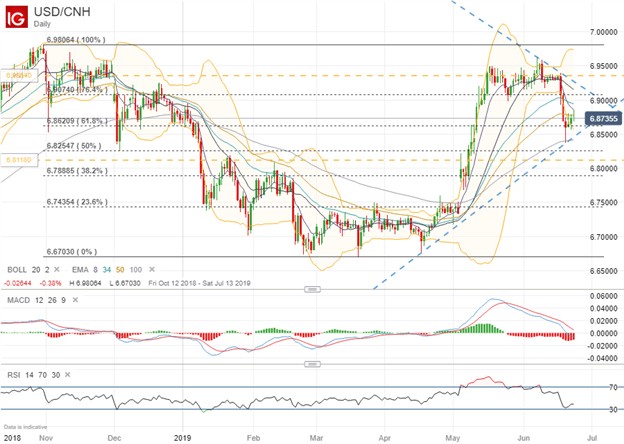 With much riding on the US China trade war meeting between the leaders of the world’s two largest economies, USDCNH 1-week implied volatility is skyrocketing and touching its highest level May 13. According to the 6.49 percent 1-week implied volatility currently priced in by forex option traders, spot USDCNH is expected to swing between 6.8118 and 6.9354 with a 68 percent statistical probability.

Spot USDCNH will likely react sharply to whether Sino-American trade relations deteriorate further or if the two countries can find common ground and break the recent impasse subsequent to Trump increasing tariffs on China. That being said, the direction of spot USDCNH over the next few days could serve as a possible bellwether to the market’s expectations for US China trade war progress as we head into the start of the G20 summit on Friday.