Monday saw a mixed start for Asia Pacific stock markets with oil prices to the fore. They traded higher again as tension lingers following last week’s shooting down of a US drone by Iran.

There’s also clear focus on the summit meeting of leaders from the Group of 20 leading industrialized economies. That kicks off in Osaka on Friday with markets keen to gauge the state of relations between Donald Trump and his Chinese counterpart Xi Jinping after months of tortured trade negotiations bore scant fruit.

The Nikkei, Hang Seng and Kospi had all managed gains by the middle of their afternoon sessions, even if they were very modest. The Shanghai Composite was weaker, as was Australia’s ASX 200. Reserve Bank of Australia Governor Philip Lowe was once again extremely measured in his assessment of monetary stimulus’ likely efficacy. This in turn had investors wondering whether they might see many rate cuts in Australia anytime soon, beyond the one already well-priced into the futures curve. The Australian Dollar found some support, but the stock market usually welcomes lower rates everywhere but the banking sector and accordingly remained in the red.

The Euro made gains on a US Dollar still under some pressure from the renewed prospect of lower interest rates from the Federal Reserve. Elsewhere the picture was more mixed with the Greenback gaining some ground on the Japanese Yen even as it wilted against the Australian Dollar.

The New Zealand Dollar continues to power up and away from 2019’s lows against its US cousin. General weakness in the latter is behind much of this strength, however. 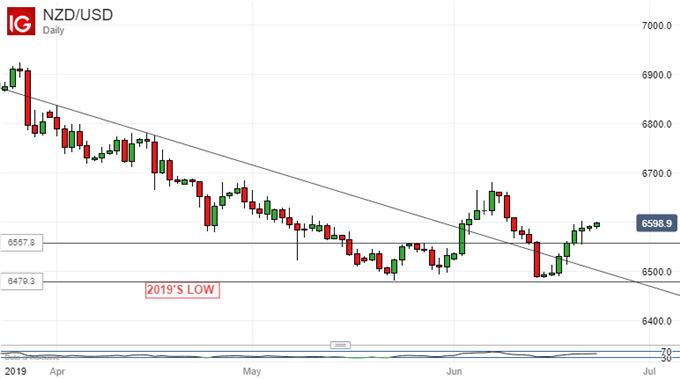 A dovish performance from the Reserve Bank of New Zealand when it meets to set monetary policy on Wednesday would be no surprise. It would also remind markets that the Fed is hardly the only central bank in the easing game these days, and may give NZDUSD bulls pause.