USDNOK plunged over one percent and broke through a 15-month rising support channel after the Norges Bank raised the benchmark interest rate to 1.25 percent and hinted at a future hike in 2019. Central Bank Governor Oystein Olsen said the decision to hike was unanimous across the board and said that growth in 2020 will be stronger than previously forecasted. 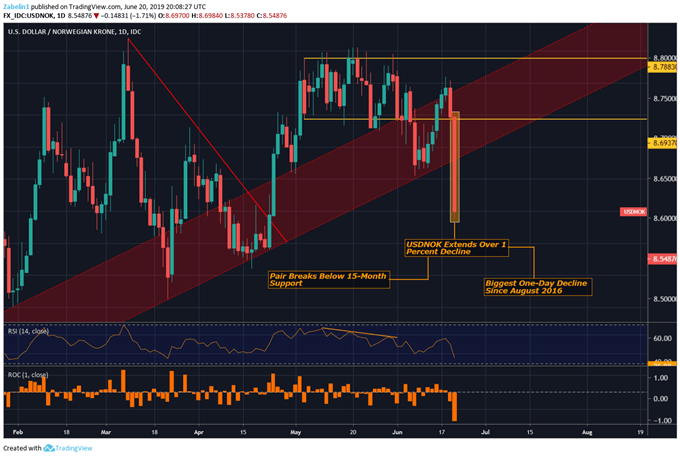 USDNOK’s sharp decline began after Fed Chairman Jerome Powell announced the decision to hold rates and radiated dovish tones that sent the US Dollar lower. USDNOK’s descent began at the FOMC meeting and was amplified by the Norges Bank’s hawkish outlook. The culprit behind the June 20 candle’s plunge appears to be a divergence in monetary policy between both central banks and broader weakness in the Greenback.

Several inflation and GDP forecasts were all revised upward, lending to credence to the notion that the central bank has a strong case for remaining hawkish. Most of its peers in developed economies are halting or reversing their rate hike cycles as the world economy slows. Norges Bank officials have expressed concern about global developments and hinted that it could impact monetary policy.

Norway’s petroleum-based economy is exposed to violent changes in risk appetite due to the fickle nature of crude oil prices and their sensitivity to shifts in global demand. Furthermore, due to the Nordic country’s strong reliance on healthy European growth, crumbling economic prospects may weigh hurt Norwegian exports and could undermine the Krone.

Looking ahead, Euro Area PMI will be published, though the recent release of the German ZEW survey suggests producers’ assessment of future growth prospects are pessimistic. The data came only shortly after ECB President Mario Draghi said the central bank is ready to re-introduce rate cuts and possibly QE if prevailing economic circumstances continue to deteriorate.