EURUSD Fails to Push Higher As Eurozone PMIs Are Mixed

EURUSD experienced a small boost this morning as German PMIs were released ahead of the Eurozone figures. Both services and manufacturing PMIs in Germany were higher than expected which push the pair up to 1.1317 before coming back to trade around 1.1310 in anticipation of wider Eurozone figures out a half hour later. The pair then corrected some of its gains as Eurozone figures came in mixed, with services beating expectations but manufacturing PMI falling short. EURGBP followed roughly the same trend as the lack of other data left EUR pairs exposed to these PMI figures. The pair pushed higher throughout the morning surpassing the 0.8913 mark before correcting on the release of Eurozone PMI figures and retreating to 0.8904. 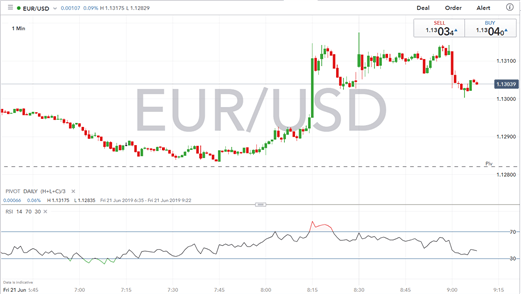 German June Manufacturing PMI was up to 45.4 (Exp. 44.6) from the previous 44.3 and Services PMI was 55.6 (Exp. 55.3) up from 55.4 in the previous month. But investors remain wary about the health of Eurozone’s largest economy because despite the figures having improved from the previous month a number below 50 indicates contraction which means that the manufacturing industry, which is a big part of Germany’s export-led economy, continues to slow down, albeit at a slower rate.

Risk in the Eurozone has continued to increase as the EU finds itself with many open fronts, including ongoing Brexit concerns, Italy’s threat of a parallel currency to overcome its budget indiscipline, and the stalled talks with Switzerland over their various trading accords. It seems like more relationships between the member countries and the Central Government are getting strained and deteriorating sentiment in a moment when the EU finds itself with most of its top jobs up for grabs.

And as mentioned by Mario Draghi in his opening speech in the Sintra forum on Tuesday, the Eurozone continues to face challenges and the ECB is prepared to increase its monetary easing policy if economic conditions continue to worsen. Eurozone bond yields, which measure the reward investors get for their investment, have continued to fall as bond prices increase, measuring the increased perception of risk that investor’s see within the Eurozone.