Since late April, crude oil prices have shaved off over 12 percent, though rising tension in the Gulf – with Iran at the epicenter – may provide sporadic boosts to the sentiment-linked commodity. Ever since US President Donald Trump shredded the 2015 nuclear agreement with Iran, reimposed sanctions and ended waivers for importing Iranian crude, tensions between Tehran and Washington have dramatically escalated.

Relations between the two significantly soured after oil tankers were attacked in the Gulf of Oman, followed by accusations by the US – with Saudi Arabia agreeing – that Iran was behind the attack. Officials in Tehran denied their involvement in the attack. Adding proverbial fuel to the fire, an unpiloted US drone was recently shot down by Iranian military after the aircraft wandered into their airspace.

Washington disputed the accusation, claiming that the drone was in international airspace. Political risks in the region will likely continue to escalate in light of Washington’s decision to deploy an additional 1,000 troops and offense-oriented military hardware and aircraft like B-52 bombers. In response, Iran has threatened to choke the artery of global oil supplies by disrupting trade through the Strait of Hormuz.

Long-term rival to Iran and US-ally Saudi Arabia has said that it is working with other Gulf states on potential measures to curb what they perceive to be “aggressive behavior” from Iran. In a press conference, US President Donald Trump said that everyone will “soon find out” what Washington’s response will be. The vague nature of this comments opens to the door to greater politically uncertainty and volatility in crude oil.

On June 20, crude oil prices jumped more than three percent, with all indicators pointing to regional political risk as the primary culprit. It was the biggest one-day change to the upside since December 2018. Supply shock fears continue to buoy Brent, though upside momentum may ultimately succumb to the broader downtrend. The next major obstacle will be entering the lower lip of the 66.91-70.27 range. 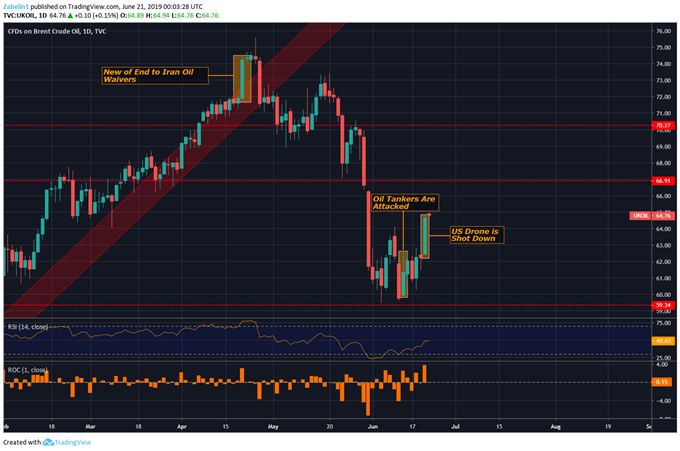