US President Trump ordered strikes against a few targets in Iran Thursday before rescinding the order, according to a range of sources. The strikes, in retaliation for the shooting down of a US drone, would have put the two countries on the brink of war, with both leaders taking an increasingly belligerent stance. According to the New York Times, quoting an unnamed senior administration official,"Planes were in the air and ships were in position, but no missiles had been fired when word came to stand down."

Oil took this news as another opportunity to jump higher as tension in the Gulf increases. Earlier in the week, oil rallied hard on the back of news reports that Iran had shot down a US drone, with Iran saying the drone was in its official airspace while the US said the drone was hit in international airspace. In retalitaion to recent action, Iran warned that that while it had no intention of going to war, 'we are completely ready for war'.

In addition, oil also received a boost this week on news that the US and China had agreed to trade talks next week, easing tensions between world’s two largest economies.

Brent crude, currently trading at $64.52/bbl. now nears two levels of technical resistance that may slow further upside in the short-term. The 200-day moving average currently sits at $65.10/bbl. just ahead of 50% Fibonacci retracement at $65.60/bbl. The CCI indictor also points to the market being over-bought. To the downside, there are a cluster of recent highs between $63.70/bbl. and $62.28/bbl. that may slow down any sell-off. 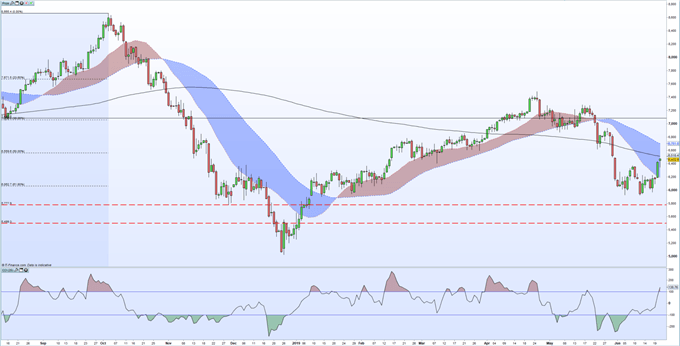 IG Client Sentimentdata show how traders are positioned in a wide variety of asset classes and how daily and weekly shifts can affect market sentiment.