See our quarterly USD forecast to learn what will drive prices throughout Q2!

Fed Delivers as U-Turn is Confirmed

Yesterday, the Federal Reserve confirmed its U-Turn in monetary policy, delivering what the markets had wanted. The Federal Reserve dropped its guidance of “patient” and instead highlighted their “readiness to act in order to sustain the expansion”, thus opening the door to rate cuts. This was also reaffirmed by the dot-plot projection, which showed a sizeable shift with 8 members projecting a rate cut, 7 of which are looking for 50bps worth of easing. Chair Powell also noted that those who saw rates on hold, the case for a cut had strengthened. To add to this, Powell stated that the Fed could potentially bring its QT unwind to an end, earlier that previously stated. In reaction to the dovish signal from the Fed, the USD index had come under pressure across the board with US 10yr yields dipping below 2%, while US equities edged towards record highs.

As we highlighted at the beginning of the year, markets are indeed dictating monetary policy. (full analysis) In turn, this sees Gold in pole position to benefit. (full analysis) Of course, focus will turn towards the G20 summit and most importantly the talks between Trump and Xi. 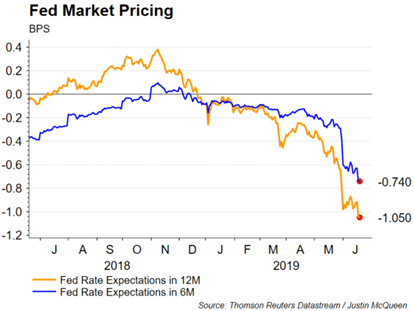 When it comes to easing monetary policy, the Fed have seemingly more firepower than the ECB, given that the latter is already in negative territory. Source reports earlier this week noted that the ECB would use rates as its first policy tool, as such, with all else being equal, the USD stands to weaken against the Euro with the Fed seen easing policy by almost 75bps, relative to the 13bps by the year-end. Consequently, the greater focus for ECB policy will be on whether they reintroduce QE for the Euro to materially weaken against the greenback.

The USD is now edging back to the pivotal 200DMA, previous attempts to make a closing break has failed. However, a firm move below puts the greenback at risk of further losses, opening a move towards the 96.00 handle. 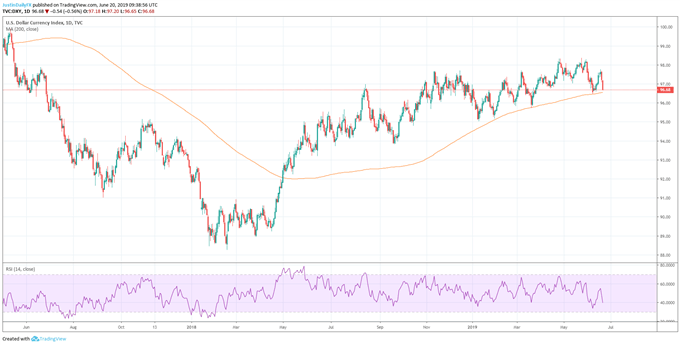