The Japanese Yen gained a little on the US Dollar Thursday after the Bank of Japan changed none of its monetary policy positions.

That means the key short-term rate stays at -0.1%, the ten-year Japanese Government Bond yield target is still 0.0% and the pledge to increase bond holdings by JPY80 trillion (US$740 billion) annually endures.

Rate-setters remained worried about the effects of global factors on the Japanese economy and noted some weakness in both exports and output.

USD/JPY slid moderately after this very ‘steady as she goes’ decision from the BoJ, which contrasted with Wednesday’s Federal Reserve policy meet at which more monetary easing was kept as a clear, near-term prospect. 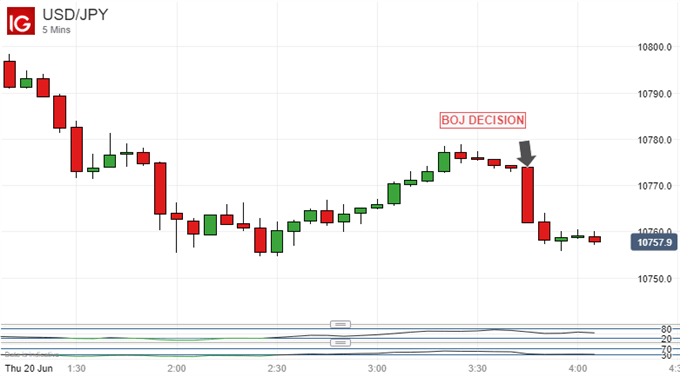 The Japanese Yen has been strengthening relentlessly against the US Dollar since late April as a variety of global worries has spurred demand for perceived haven assets. Chief among those has been the trade spat between the US and China. Japan is also a country which has run persistent trade surpluses with the US and as such has also been in the White House’s sights.

A Fed pausing its rate increases and, now, it seems, moving closer to taking some of them back has also accelerated the Dollar’s slide. 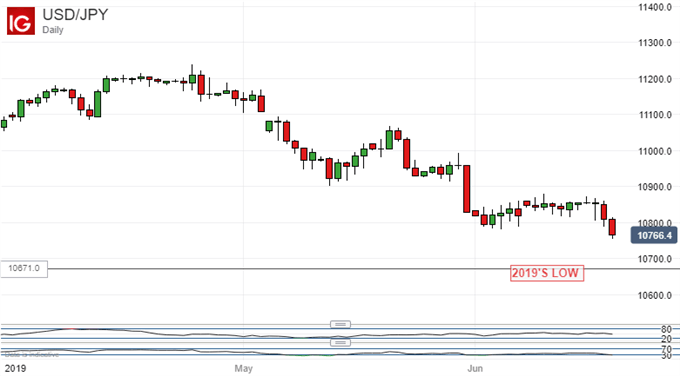 There are some signs that disquiet with the BoJ’s ultra-accommodative monetary policy are growing as it signally fails in its chief aim- the stimulation of pricing power. The most recent official release showed consumer prices rising by only 0.9%, way below the 2%-plus long targeted by the central bank but not achieved since 2015.

A regular business survey from Reuters released this week found only 5% of firms wanted more monetary easing, with the rest preferring fiscal measures.

It’s clearly too soon for any major change of tack at the Bank of Japan, but should inflation remain docile, questioning of the sort revealed by Reuters’ survey will probably get a lot louder.