USD: Global central bank easing is on its way as the Fed confirms shift towards lowering interest rates. Consequently, the USD is underperforming across the board to test the 200DMA (96.61) once again as the decline in US yields erode support for the Dollar. However, an extension of losses could be exacerbated on a break below 96.50. (full analysis)

GBP: Despite the recent hawkish rhetoric from the BoE rate setters Haldane and Saunders, the BoE ultimately joined the rest of the world in citing a cautious approach to monetary policy at today’s meeting. The central bank had cut their Q2 GDP forecast to 0% from 0.2%, while also stating that inflation could be lower their 2% target later in the year. However, while GBP saw a modest pullback from its recent gains, the outlook for BoE policy has not changed in that they will remain on the side-lines until Brexit clarity is found.

CAD: The Loonie is soaring this morning, extending on yesterday’s gains inspired by not only a dovish Fed but the higher than expected inflation report. Alongside this, oil prices have spiked higher on yet another apparent escalation in the Middle East after Iran had downed a US drone that had reportedly been in Iranian airspace. As such, Brent crude futures rose as much as 3% to hover around $63.50.

NOK: Norges Bank confirmed it is the last hawk standing in the G10 having raised rates to 1.25% as expected, while also stating that they will most likely raise the rate again in September. Consequently, the NOK is the outperformer in the FX space, surging near 2% against the greenback. 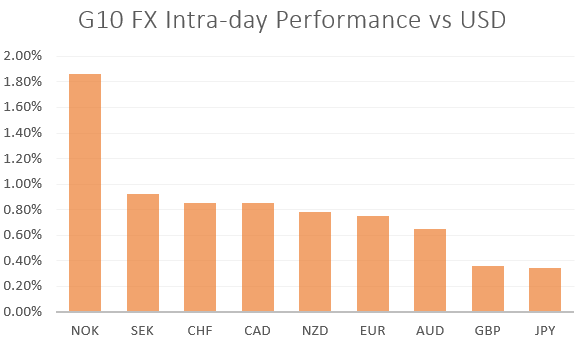