GBPUSD had been making steady progress since Tuesday ahead of key Central Bank decisions announced this week but the pair dropped 0.25% on Thursday morning after the Bank of England left rates unchanged as expected but failed to deliver a more hawkish tone on the future possibility of rate hikes. GBPUSD climbed on Wednesday after a dovish stance from the FOMC left rates unchanged and pushed the dollar lower. But the gain in Sterling was not due only to dollar-forces as the pair gained 178 pips in the overnight session as investors awaited the BoE rate decision with positive expectations, on the back of figures released on Wednesday showing that inflation remains around the target rate of 2%. Sterling also dropped against the Euro as EURGBP gained 0.27% after the BoE announcement, currently trading at 0.8895. 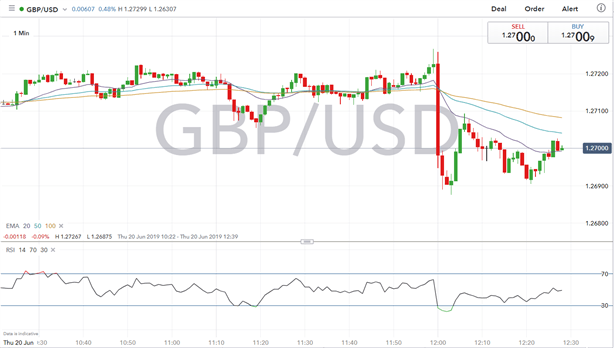 The benchmark borrowing rate has been left unchanged at 0.75% but the Monetary Policy Committee (MPC) turned even more dovish as they cut expectations of UK GDP growth to 0% for the second quarter of 2019, down from 0.2%, and signalled that downside risks have increased. The small boost Sterling was experiencing before the announcement seemed to be on the back of investors hoping that the BoE would change their forward-looking guidance from wait-and-see what happens with Brexit to a more hawkish rate hikes are likely stance, but they failed to deliver.

And what is going on with Brexit?

Despite the new deadline for Brexit (Oct 31) fast approaching, any progress on the topic seems to be on halt until the Tory leadership race comes to an end and the UK is appointed a new Prime Minister. As candidates are slowly being narrowed down to the final two that will face a conservative members’ vote starting next week, Boris Johnson is almost certain to be one of the two contenders after he swept 143 votes on Wednesday’s round of voting. The race is now on for the three remaining candidates to become the one that stands next to Mr. Johnson in the final vote, with increased likelihood that it will be either Jeremy Hunt or Michael Gove, who in Wednesday’s vote received 54 and 51 votes respectively.

But turmoil could still be ahead for Sterling as the likelihood of Boris Johnson becoming the next Prime Minister increases the chances of a no-deal Brexit. As a hard-line Brexiteer Johnson has vowed to take the UK out of the European Union on October 31 regardless of whether a deal is in place. There is a chance that if Boris is elected Parliament could pass a no confidence vote which could trigger a general election and further delay article 50. But this scenario could be seen as potentially more damaging than a no-deal as UK lawmakers have been on standby for the last year waiting for an outcome on Brexit to be decided and pushing the deadline back again would only increase the uncertainty surrounding the UK’s future, with the likely outcome that markets will continue to punish Sterling and UK equities.

Volatility in GBP pairs can be expected to continue throughout the day as a third ballot will be held tonight to narrow down the possible candidates for Tory leadership.

CHART OF THE DAY: BREXIT TIMELINE 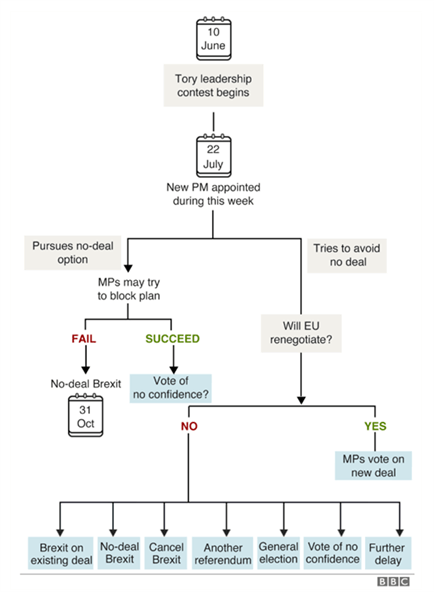