After the Federal Reserve opened the door to rate cuts in the near future, the outlook for both the Dow Jones and the S&P 500 has perked up. With the possibility of looser monetary policy – thereby allowing corporations to borrow more money in an effort to spur growth – the fundamental groundwork has been laid for stocks to retake all-time highs. Now the concern lies with trade wars and the degree to which rate cuts have already been priced into the indices.

In the month-to-date, the Dow Jones has climbed 7% and the S&P 500 6.65%. It could be argued much of the returns can be attributed to the market’s expectation of a dovish Federal Reserve. Those expectations were fulfilled Wednesday and the subsequent odds of a rate cut at July’s FOMC meeting have soared to 100%.

With that in mind, commentary from Fed officials and the pace at which the Fed will look to cut rates will likely dictate the follow-through of the two major stock indexes. If it comes to light that the market has priced in too much dovishness too soon, the rug could be pulled out from under the Indices. In the meantime, the Dow Jones and S&P 500 will look to nearby technical levels for price influence. 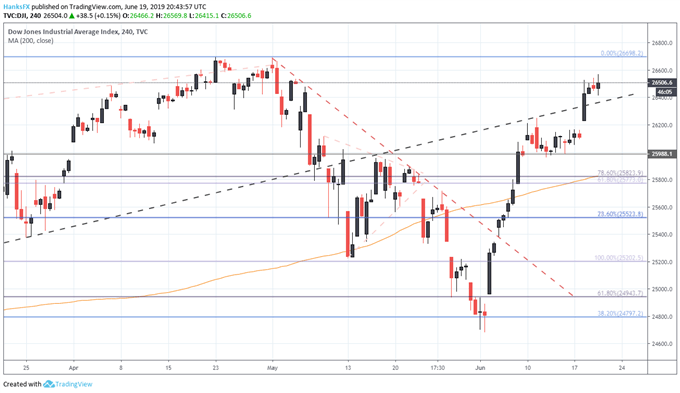 To that end, the Dow Jones will have to negotiate topside resistance at May highs – around 26,698. The level will pose the first point of contention for a continued run higher, before subsequent resistance from highs in September 2018 come into play. On the other hand, the Industrial Average enjoys nearby support from the ascending trendline originating from February and secondary support around 26,000. For technical updates on the Dow Jones and S&P 500, follow @PeterHanksFX on Twitter. 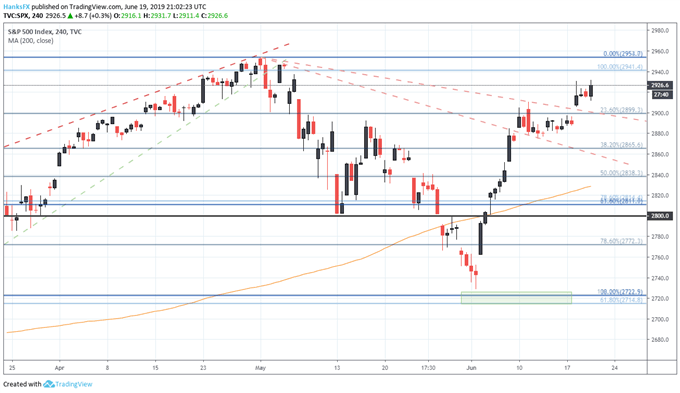 Not to be outdone, the S&P 500 posted a solid +0.30% return on the day – with considerable assistance from the utilities sector. The utility-tracking XLU ETF gained 1.15% in Wednesday’s session alone, as deteriorating inflation expectations bolstered the industry’s profitability outlook. From a price perspective, the S&P 500 is much nearer to all-time highs – having posted a record closing price as recently as May 1. Regardless, the record level will similarly pose as resistance – but the Index has less distance to travel before a retest can be staged.

As far as support is concerned, the S&P 500 enjoys nearby buoyancy from the 23.6% Fib level around 2,900 and a potential trendline marked by May 1 and June 11 highs. That said, the latter level has not yet proven it holds technical influence and could therefore be dispatched easily. With the week’s most important event risk in the rearview, the two indices will shift their attention to commentary from the Bank of Japan – due to decide on their own interest rate early Thursday. Aside from scheduled event risk, trade war progress will remain crucial in maintaining the optimistic attitude that equity markets currently enjoy.