Stocks Up On US-China Trade Hopes in APAC Trade, Fed Decision Due

There was a liberal smattering of green across all major Asian mainboards Friday, hardly surprising given the international lead.

Stocks soared on a combination of bullish factors. The first was Tuesday’s news that Donald Trump reported an amicable telephone conversation with his Chinese counterpart Xi Jinping, in turn fueling hopes that the two will keep talking on trade into this month’s Group of 20 meeting in Osaka. The second came from the European Central Bank. Its President Mario Draghi strongly hinted that more stimulus could be on the way.

Mainland Chinese stocks soared with the Yuan also higher. The Shanghai Composite was up by over 1.5% in the middle of its afternoon. Shenzhen was up by 2.3% with Hong Kong’s Hang Seng adding a similar amount.

Australia’s ASX 200 saw gains too, boosted by its material sector which gained sharply. Oil prices made big gains in the wake of Mr. Trump’s optimistic appraisal and that as usual helped the entire raw materials complex. Rio Tinto was up as was the Fortescue Metals Group. The index overall looks set to break a technical uptrend on its daily chart which has stood since early February. This could put record peaks firmly back in sight. In Japan, the Nikkei added 1.7%. Softbank led the charge.

Wednesday’s economic data showed that Japan’s exports fell 7.8% on the year in May, a sixth straight month of falls. However even this gloomy data was insufficient to quell market optimism.

The US Dollar made gains against a basket of its major traded peers as Wednesday’s Federal Reserve monetary policy meet loomed large. Futures markets still seem to think that US rates are headed lower despite last week’s stronger retail sale and industrial production numbers. However, no move is expected this month and the Fed now has plenty of competition in the monetary easing stakes.

USD/JPY is recovering only very gradually from the sharp falls of late May. 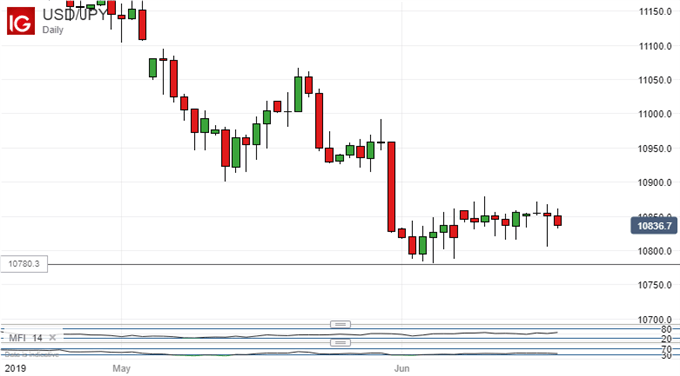 However there seems little appetite to revisit recent lows against the current backdrop of extremely dovish central banks across the developed world.