Early in Tuesday’s session, President Trump announced via Twitter that he and Chinese President Xi Jinping would meet next week at the G-20 Summit in Osaka Japan. He added that officials from each side will begin talks prior to the meeting between the two heads of state. The development is a welcome one for markets after the two sides suffered a breakdown last month. Since then, it has been widely debated whether Trump and Xi would meet in Osaka.

The debate was put to rest when President Xi confirmed the meeting via Chinese state media but offered a more cautious tone. The Chinese President agreed both sides should keep in contact to resolve the dispute and hoped that “the United States would treat Chinese firms with respect,” likely a reference to Huawei. Still, President Xi conceded that stalled talks were detrimental to both sides and that progress should be made if possible. In response, USDCNH dropped to 6.9055 and is on pace for its worst day in two months. 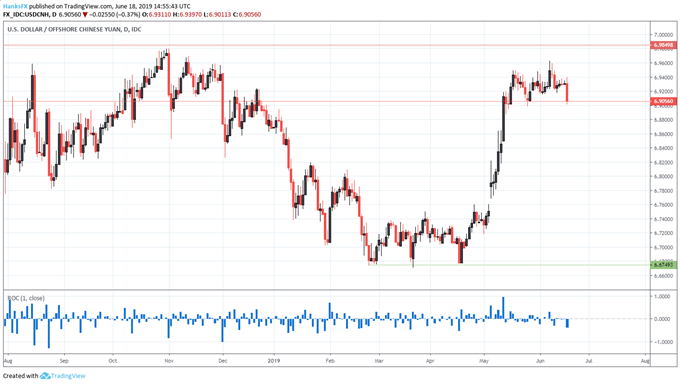 Conversely, the Dow Jones added to its early-morning gains – up 1.55% from Monday’s close at the time of this article’s publication. 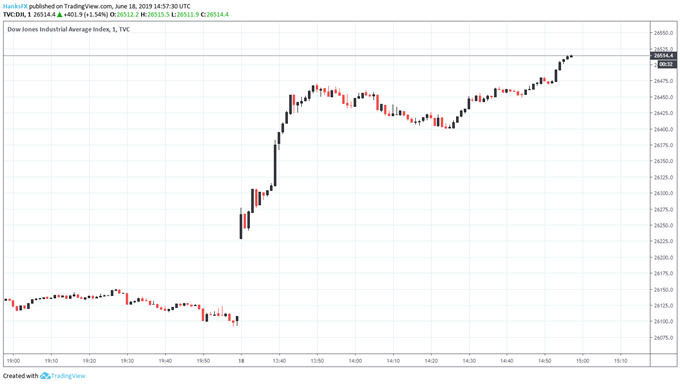 Following a hearty gap higher on dovish hopes headed into the Fed meeting tomorrow, the Industrial Average was able to surpass an ascending trendline from early February. With technical resistance behind it, the Average can now look to retake May highs around 26,750. 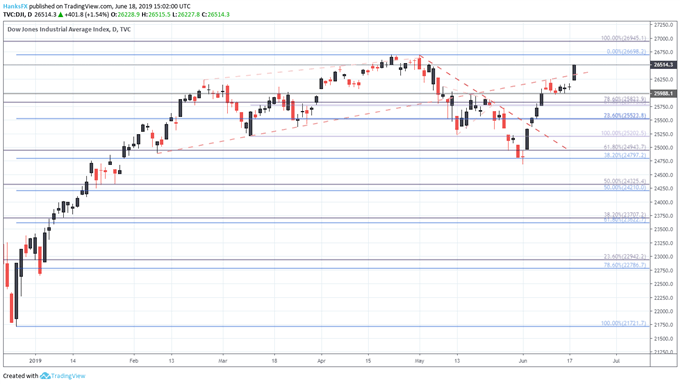 That said, the Index will likely pause its advance as price action stalls ahead of Wednesday trading. While renewed trade negotiations have undoubtedly added to bullish sentiment, traders may wish to remain on the sidelines until Wednesday’s event risk has passed. In the meantime, check out our economic calendar for upcoming Fed meetings and economic data.