US Trade Rep Lighthizer Testifies Before Senate Committee on USMCA

On Tuesday the United States Trade representative Robert Lighthizer testified before the Senate’s Finance Committee, briefing members on the USMCA trade agreement and President Trumps trade agenda. Lighthizer, who is the head of the Office of the US Trade Representative Office is the Chief negotiator in matters of trade and spearheads negotiations with other countries under the direction of the President.

Lighthizer started off his testimony highlighting the US economy and mentioning the low unemployment rate, rising wages, and strong growth in manufacturing over the last two years. Also noted was his work with both Republican and Democratic Senators and trying to give concern to both sides of the aisle as he has negotiated the USMCA over the past year saying, “many of the improvements in this agreement reflect Republican and Democratic members ideas and thoughts”.

Lighthizer’s testimony comes at a time when trade tensions with China are at a critical point. That said, President Trump announced earlier Tuesday that he will meet with Chinese President Xi Jinping at the G20 summit coming up on June 28. The market rallied on the news with the S&P 500 rising strongly on the open, hitting 2930.8 this morning, however the volatility index also rose as the market awaits this week’s decision from the Federal Reserve on interest rates. Treasury yields remained subdued with the 10-year yield hovering slightly above 2 percent at 2.058%. 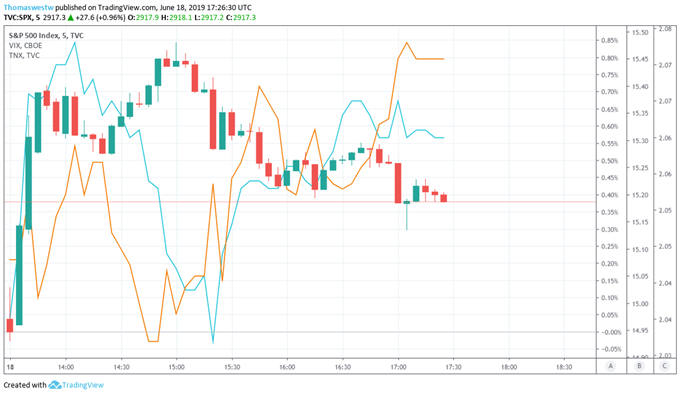 The USMCA was referred to by Lighthizer as the gold standard for intellectual property, digital economy, financial services among other areas along with far reaching provisions that will eliminate unfair trading practices. Senator Cornyn asked Lighthizer how his talks with House leader Pelosi were going. Lighthizer assured the Senator that progress has been made but hopes to make more substantial progress in the coming weeks. House leader Pelosi’s sign off for the USMCA is vital to passing the measure in the Democrat-controlled House. Its passing would solidify North America’s trade dealing and offer certainty for investors, thus removing a persistent headwind the market has had to face.