The Australian Dollar fell Tuesday after the Reserve Bank of Australia appeared to make an unsually explicit signal of yet-lower interest rates ahead.

The minutes of June 4’s Reserve Bank of Australia monetary policy meeting found rate-setters saying that further monetary easing was more likely than not to be appropriate in the months ahead.

They recognized that rates were not the only way to boost activity, which was perhaps yet another veiled plea to the Australian government to stop relying on monetary policy and dial up stimulus from the fiscal side.

The meeting produced the first cut in the Official Cash Rate since August 2016 and took that key rate down to a new record low of 1.25%. Back then what was seen as quite a measured statement from the central bank actually saw the Australian Dollar gain.

It is now firmly back on the defensive as the scale of policy dovishness at the RBA becomes apparent, banishing any thoughts of a ‘one and done’ rate cut. AUD/USD duly lost ground. 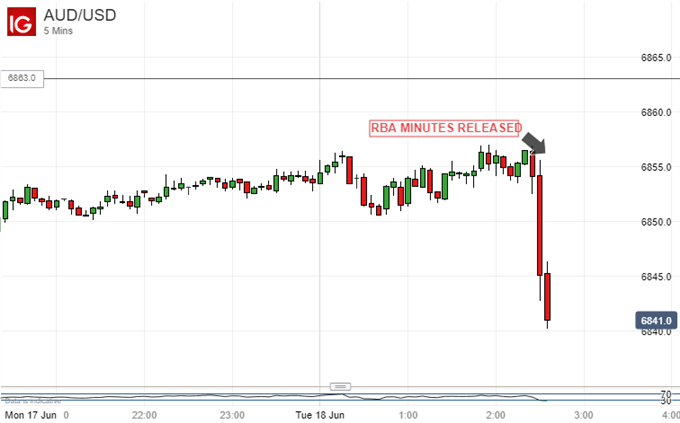 Rate futures markets price-in a very high probability of more reductions soon in any case, and did well before Tuesday’s release.

Another quarter-point cut is built-in to the interbank cash futures curve by September, with further falls also expected next year. Given the country’s enormous levels of private debt, deep cuts may well be less likely than the market now thinks. However, the Australian Dollar clearly lacks any semblance of monetary policy support. Moreover, while domestic consumer price inflation remains below the RBA’s 2-3% target band, it can’t hope for any.

AUD/USD has been in a steady downtrend since the start of 2018. That downtrend has accelerated since May, taking the pair back below 2019’s early lows. 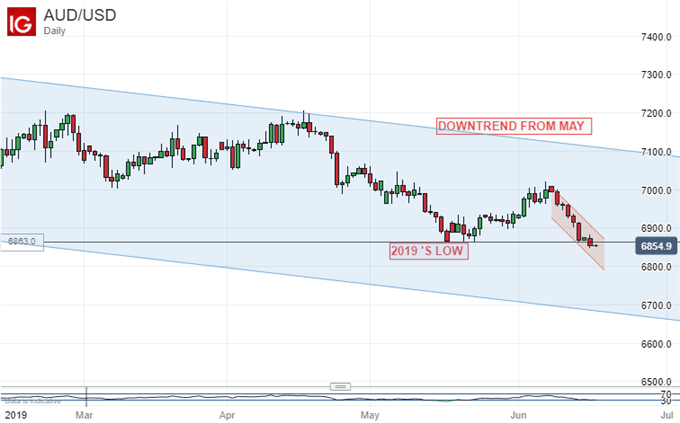 Much near-term direction may well depend on the tone struck by the US Federal Reserve when it announces its own policy settings on Wednesday. The Australian Dollar might also make some upward headway if there are any signs of trade settlement between the US and China, unlikely though that seems at present.

However this total lack of interest rate support seems likely to define the overall direction of this market now and probably for at least the rest of 2019.