The pro-risk Australian and New Zealand Dollars are aiming lower in morning Friday trade as the anti-risk Japanese Yen gains. At first glance, this appears to be a case of general risk aversion, but stocks are aiming cautiously higher looking at APAC equities. Furthermore, S&P 500 futures are pointing to the upside heading into European and US trading hours.

NZD’s decline with local front-end government bond yields was initiated by dismal New Zealand Manufacturing PMI below. Growth clocked in at a snail’s pace, just 50.2 in May versus 53.0 prior. That was the softest pace of expansion since December 2012 and follows a steady slowdown since the beginning of this year. This underscored action taken by the RBNZ to cut rates back in May as inflation slowed.

Hours later, both the AUD and NZD extended losses as the National Australia Bank (NAB) and Royal Bank of Canada in Sydney envisioned the RBA cutting rates further in the near-term. The former sees rates at 0.75% by November. The latter sees them at 0.5% by May 2020. Overnight index swaps are now pricing in a greater than 60% chance of a cut from the Reserve Bank of Australia next month.

Gains in the Japanese Yen might have had more to do with an unwinding of carry positions due to increasingly dovish shift in monetary policy expectations, rather than a selloff in stocks. In fact, earlier in the day, results in US government bond auctions indicated strong demand for haven assets as yields fell, perhaps amid rising fears of a recession. This is undermining the appeal of the relatively high-yielding AUD and NZD. Meanwhile, the US Dollar could benefit the most if a premium is placed on liquidity. 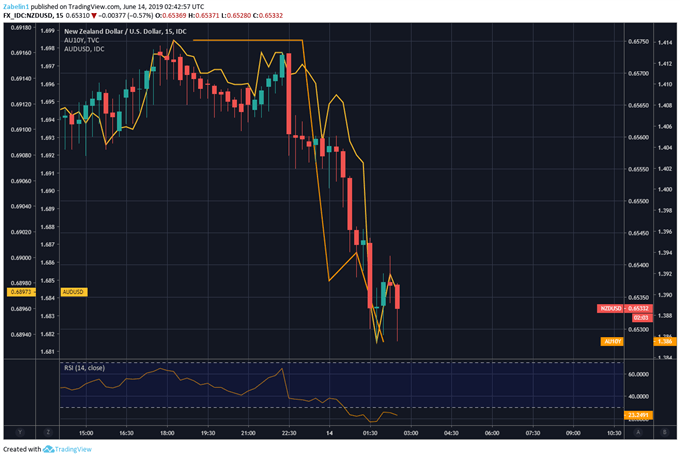 Taking a closer at NZDUSD, the pair has been resuming the dominant downtrend that took it from a peak of 0.6940 back in March, to lows set in May above 0.6482. If the appeal of the pro-risk AUD and NZD continues to deteriorate, Kiwi Dollar may be very well looking to not only breach current 2019 lows, but also then extend declines to eventually testing 0.6425. 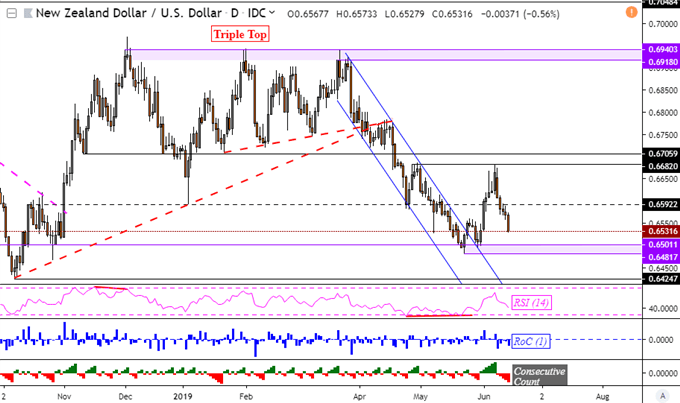