Asia Pacific stock markets put in a mixed showing to end the week with overall risk appetite capped by Thursday’s attacks on two oil tankers in the Gulf of Oman.

The US State Department has pinned the blame for them squarely in Iran, while stressing the need for diplomacy. For its part Tehran has denied involvement. The story has already seen oil prices rise, with the Dow gaining just over 100 points on Thursday as the energy sector gained.

International benchmark Brent rather drifted through the Asian session, coming off its Thursday highs but not by very much. There are signs that it is edging up again as the European open approaches.

The Nikkei 225 was up 0.2% in the middle of the Tokyo afternoon with Sydney’s ASX up by 0.1%. Chinese stocks were lower both in Hong Kong and Shanghai. Mainboards there slipped back after scoring initial gains. Investors there faced the aftermath of this week’s extraordinary anti-extradition-law protests in Hong Kong which reportedly left more than 80 people injured.

Obviously much market emphasis is now on next week’s monetary policy meeting of the US Federal Reserve. The central bank meets on Wednesday and, while no changes are expected, the market is now looking for an interest rate cut in July. The extent to which any commentary supports this thesis will probably be crucial across markets.

The US Dollar was a little higher against major rivals and on-track for a weekly gain, however. The Australian and New Zealand Dollars were pressured by lower bond yields after some miserable Purchasing Managers Index numbers out of the latter’s homeland. It’s clear that the Fed is far from the only central bank thought highly likely to cut interest rates in the near future.

NZD/USD has now retraced its steps back into the old daily-chart trading range which last endured between mid-May and the start of June. 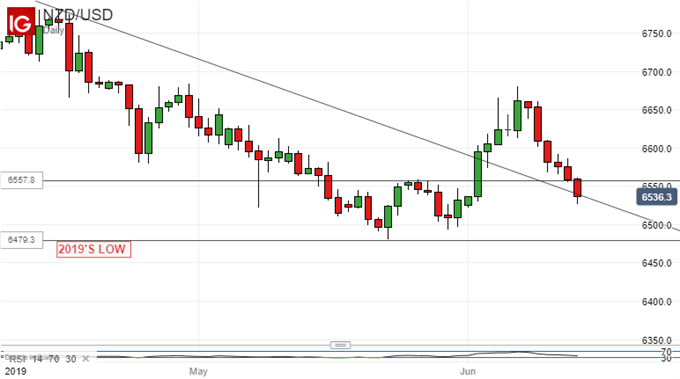 The pair is also very close to its former long downtrend line, with a weekly close below that likely to bring the year’s lows back into very close consideration.

The rest of the trading day will offer investors plenty to chew over, with US retail sales figures for May coming up, along with the University of Michigan’s venerable consumer sentiment snapshot.