The Nikkei 225, Japan’s benchmark stock index, traded about 0.6 percent lower heading into the close. Information technology shares underperformed, and video game maker Nintendo slumped. The latter announced yesterday that it is moving some console production out of China amidst trade wars.

Australia’s ASX 200 was close to little changed as it was offered some relief by rising expectations of a cut from the Reserve Bank of Australia, again. A lackluster employment report sent local front-end government bond yields falling, with the 3-year dropping below one percent for the first time on record.

In Hong Kong, the Hang Seng Index slumped about 0.9%, extending declines from yesterday as extradition protests continued and as one-month HIBOR climbed to its highest since 2008. USD/HKD has seen aggressive declines as of late after flirting with the HKMA’s weak-side convertibility undertaking.

S&P 500 futures are pointing decisively lower, hinting that risk aversion may prevail over the remaining 24 hours. As such, the anti-risk Japanese Yen may extend gains as Wall Street gaps lower. This would pose to bode ill for the pro-risk Australian and New Zealand Dollars, which are already lower.

Taking a closer look at the ASX 200, the index recently left behind a Shooting Star candlestick, which is a sign of indecision. Meanwhile, negative RSI divergence warns that upside momentum is fading. As such, technical signals are warning of a top that could be in the making. For medium-term conviction, keep an eye on the rising channel of support going back to February on the chart below. 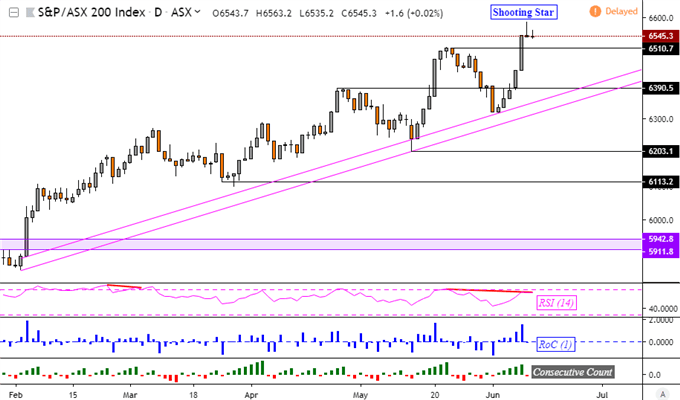