Asia Pacific stocks rose Monday on a combination of upbeat economic data and some trade relief on last week’s announcement that the US would not after all be raising tariffs on a range of Mexican goods, even though President Donald Trump has reportedly said that they remain very much on the table.

Automakers such as Nissan, Toyota and Kia caught a special bid. Mexico is used as a production base and point of entry to the US by many regional car builders.

Official Chinese trade data for May showed above-forecast exports while imports underwhelmed, leaving an overall trade surplus of $41.65 billion. The trade surplus with the US alone rose to $26.89 billion from $21.01 billion in April.

Japan’s first quarter economic growth figures were revised up slightly to 2.2% on the year, from 2.1%.

The Nikkei 225 was up 1% as its close approached, with the Hang Seng up 2% and the Shanghai Composite higher by 1%. Australian markets were closed for a holiday.

Mexico’s Peso got an understandable lift on the foreign exchanges. The US Dollar was broadly higher after a tough time last week, but its gains remain capped by increasing expectations that the Federal Reserve could cut interest rates quite soon following weak official employment data.

USD/JPY has been inching up for the last seven sessions or so, but it remains very much within the current short-term downtrend channel. 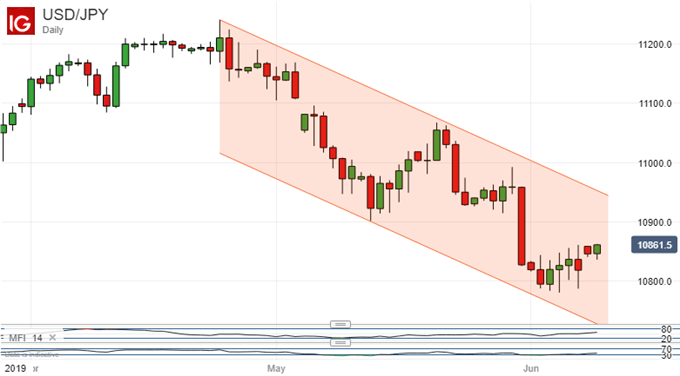 Dollar bulls have yet to claw back the ground they lost in the sharp falls of May 31.Even if they can, the slips of May 22 and 23 will still loom over them and in any case another bearish ‘lower high’ looks to be the most plausiblescenario now.

The rest of Monday’s session offers a plethora of UK economic numbers but little else. Highlights are due this week however, with official US inflation figures coming up on Wednesday and Australian employment data coming up on Thursday.