The near-term uptrend in the Australian Dollar against its US counterpart held after a set of mixed local first quarter GDP data. Australia’s economy expanded 1.8 percent y/y, as anticipated and softer from 2.3 in the fourth quarter of last year. This also represents the slowest pace of growth since the first quarter of 2017, exactly two years ago.

Things were looking mixed when turning our attention to the quarter-on-quarter figures. Australia’s GDP clocked in at 0.4 percent q/q, lower than 0.5 expected but higher than the 0.2 outcome prior. On the chart below, this represents the highest outcome since the second quarter of last year. 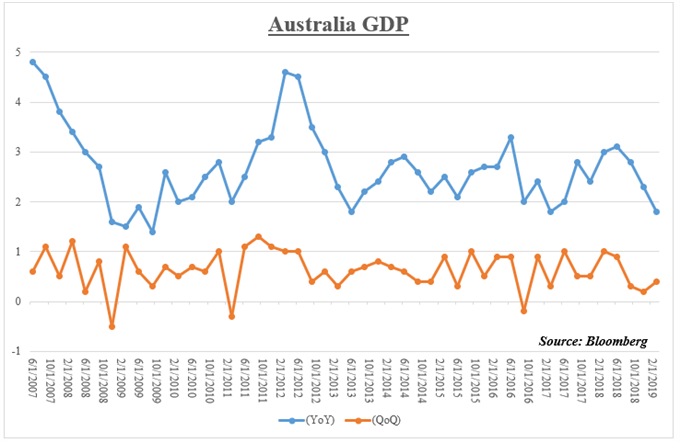 Shortly after, Chinese Caixin PMI data crossed the wires and slightly dented the Aussie. In May, the private gauge of services activity clocked in at 52.7 versus 54.0 expected. Keep in mind that a reading above 50 indicates expansion. However, the data was not as impressive as the 54.5 outcome in April. China is Australia’s largest trading partner, and economic performance in the former can impact the latter.

Generally speaking, the economic outcomes today from Australia and China fall in-line with trends pointing to increasingly disappointing results relative to expectations. Despite this, the pro-risk Aussie maintaining its ground could point to the uptick in market optimism that was leading Asia Pacific benchmark stock indexes higher after a rosy session on Wall Street.

However, over the past 24 hours, Mexico hinted that it favors looking for an agreement instead of retaliation after US President Donald Trump threatened to slap 5% tariff rates on imports across the board form the nation. Despite warnings from some of his Republican colleagues against these actions, Mr Trump said that he was not bluffing. Trade war fears may yet reemerge, hurting the pro-risk Aussie Dollar.

For the time being, AUD/USD is climbing deeper into a near-term range of resistance between 0.6892 and 0.7012. If it holds, we could be looking at a turn lower towards 0.6900 and then 0.6865. Otherwise, clearing resistance opens the door to testing 0.7057. You can follow me on Twitter for the latest updates in AUD here at @ddubrovskyFX. 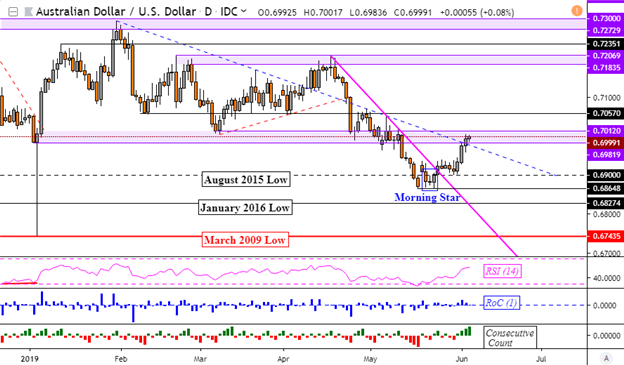