Brazilian stock markets rose after local GDP data came in at exactly what analysts had forecasted. Quarter-on-quarter growth confirmed that the economy did indeed contract in the early breaths of 2019. As outlined by the most recent meeting at the Brazilian central bank, weaker growth from the latter half of the year made its way into the early stages of 2019.

Ibovespa futures recovering… but for how long? 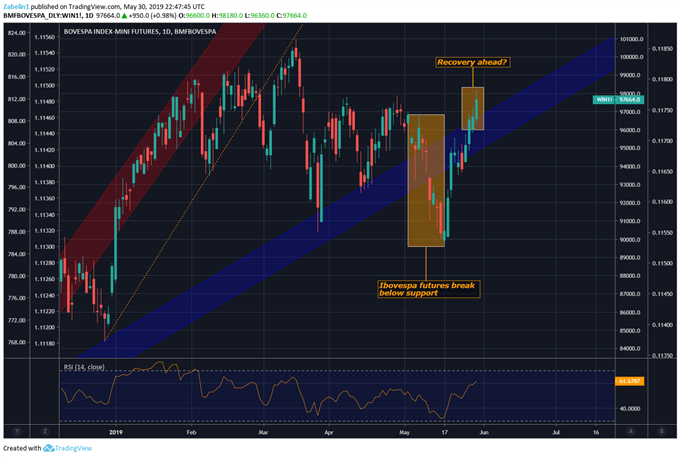 Ibovespa futures closed over one percent higher for the day and above the June 2018 rising support, signaling that perhaps investors were not quite ready to continue with the selloff in May. BRL, on the other hand struggled to gain, and actually closed lower against the US Dollar. This may have been due to weak FGV inflation data that in turn cooled expectations that the central bank may tilt from neutral to more hawkish.

The next local event risk traders with exposure to Brazilian assets will be watching for is government debt and unemployment data. The latter is expected to show a 12.5 percent print – slightly lower than the previous reading at 12.7 percent – while net debt as a percent of GDP is forecasted to be at 54.0 percent. The Brazilian government’s generous pension system is the primary culprit behind the bloating.

If government debt data is higher than expected, it could make holders of Brazilian assets nervous against the backdrop of souring global growth conditions. Brazilian sovereign bond markets may face increasing pressure if the domestic outlook also appears unfavorable against the backdrop of inhospitable global growth prospects. This in turn may fuel concerns about solvency issues and could lead to capital flight from Brazil.

Looking ahead, monitoring progress on President Jair Bolsonaro’s pension reform will be crucial in understanding price action in Brazilian assets. Externally, the US-China trade along with growing concerns about the prospect of slower global growth. These fears are compounded after US President Donald Trump threatened to impose tariffs against Mexico in an effort to curb immigration into the US.