China's Next Trade Weapon in the Ongoing US-China Trade War

China May Look to Impose Export Quotas on Rare Earths

Relations between China and the US have been deteriorating since they failed to sign a trade agreement in early May. And after Donald Trump placed Chinese telecommunications firm Huawei on the country’s “blacklist”reports that Chinese president Xi Jinping visited a rare earths magnets firm seemed to suggest that the Asian country may use exports of rare materials as their leverage in the ongoing US-China trade war dispute.

China dominates the world supply of rare earths, a group of 17 earths with a wide range of high-tech applications used in the production of camera lenses, military equipment and mobile and cars parts among others. China accounts for 80% of US rare earth imports and if export restrictions were enforced other suppliers outside of China would struggle to meet US demands for rare earths, those include Australian firm Lynas.

Reactions from the market

Although no measures have been announced, stocks of Chinese producers of rare material have jumped following the speculation, pushing the benchmark CSI 300 higher. Shares in JL Mag Rare-Earth, the plant Xi Jinping was seen visiting in Jiangxi last week, rose to their daily 10% limit for a seventh time in the last eight trading sessions on Wednesday. Shares in China Rare Earth Holdings Ltd soared up to 109% before closing 83% higher on the day on May 20th after the Chinese President was seen visiting the plant in Jiangxi. As can be seen in the graph below, the company’s shares have soared more than 112% since the speculation began last week. 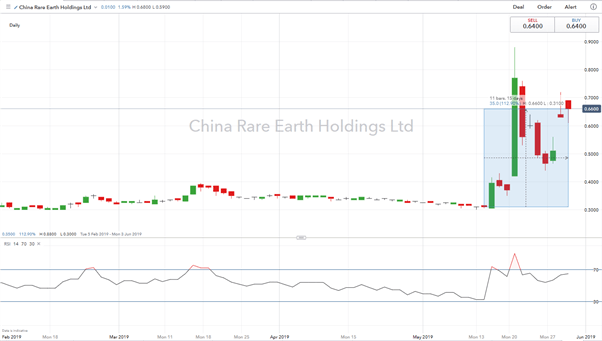 Spill over effects saw shares in Australian rare earths company Lynas rise to 8-year highs on May 29th, further signalling that investors believe China will use the materials to retaliate against the US. If export bans are imposed on Chinese companies, we could see shares in Lynas soar higher as they are one of the only miners of rare earths outside of China.

There are two sides of the coin

The main threat to the US is not the rare earth itself, but the products that result from these materials. As the US buys these finished or semi-finished products from countries that have a strong trade relationship with China, like Japan, imposing trade restrictions with the US would have a disrupting effect on their supply chains with other countries by, which in turn will have a damaging effect on China’s trade relationships.

The question really is if China is willing to go to such extent to get back to the US. Although, no action has been confirmed yet, it is unlikely that China will impose a total ban of rare earths to the US. As an alternative it can limit the amount of local production and impose export quotas to drive the prices of these rare earths higher.

Despite their name, rare earths are quite common, but they are seldom mined elsewhere because the processing equipment needed to separate them from the ore is expensive and there is a high risk of radioactive leakage. Because their supply is limited, and the production capacity of foreign producers other than China is weak, the demand of rare earths will not be greatly impacted as the US will have no choice but to pay the higher prices to ensure they receive the materials which are irreplaceable in some high-tech industries.

It wouldn’t be the first time that China used export bans of rare earths as a retaliation. In response to Japan detaining a Chinese fishing trawler captain whose vessel collided with two Japanese patrol vessels near the dispute Senkaku islands back in 2010, the Chinese government announced that it would ban the export of rare earths to Japan, to the point where custom officials where preventing the earths from being boarded on ships bound for Japan.

In reaction to this, rare earth prices had soared as the Chinese government cut export quotas by 72 per cent with rare earth exposed stocks also benefitting. However, China’s retaliation had later been deemed to be in violation of trade rules in 2014 by the World Trade Organization. The incident highlighted the need for geographic diversity of supply of rare earths.

Chinese Yuan at 7.00 Barrier: The Most Important Level for Currency Markets