USD: A relatively muted affair in the G10 FX space with the US Dollar index flat throughout the European morning. US GDP did little to instigate much in the way of notable price action, largely on the basis that today’s figures were a secondary reading, while the headline figure had also been in-line with analyst forecasts. Nonetheless, focus remains on the trade war front and with little news flow on the matter, equity markets have managed to post a relief bid across the board.

CAD: Modest outperformance in the Canadian Dollar as upbeat commentary from the BoC continues to provide an undertone of support for the Loonie. Consequently, USDCAD is back below the 1.35 handle after a false breakout above 1.3520 in yesterday’s session. Support situated at 1.3470-80.

TRY: Much of the focus as of late in the Turkish Lira has been on the tensions between the US and Turkey over the latter looking to purchase Russia’s S-400 missile defence. However, these tensions had appeared to have eased after a phone call between Trump and Erdogan over the matter, while also discussing the possibility of reducing steel tariffs to 25% from 50%. In turn, the Turkish Lira has been on the front-foot, with USDTRY breaking below the 6.00 handle. Although, some of the gains had been pared as reports suggested that Turkey were looking to deploy Russian missiles on the Mediterranean.

BRL: The Brazilian Real is the underperform among major emerging market currencies after the latest GDP statistics showed that Brazil’s growth had contracted for the first time since Q4 2016. As such, risks are subsequently tilted to the upside for USDBRL. 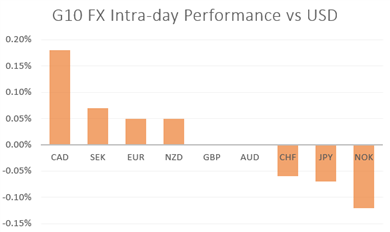 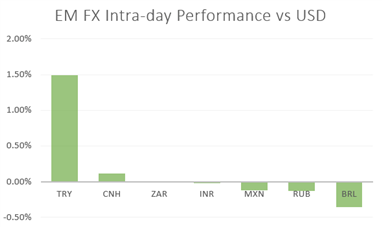