Forex option traders are pricing higher odds that the Pound Sterling could come under pressure according to rising implied volatility and declining risk reversal measures. Spot GBPUSD has slid 16 out of the last 19 trading sessions as mounting Brexit uncertainty further clouds the market’s outlook on the British Pound.

Over the last month, cross-party talks between Tory Prime Minister Theresa May and Labour Party Leader Jeremy Corbyn came to a screeching halt and reignited concerns over the ongoing gridlock in Parliament. With no sign of success or clear direction on Brexit, PM Theresa May announced plans to resign last week as calls for her to step down grew louder. Now, speculation grows over who will take over has successor after PM May steps down on June 7. 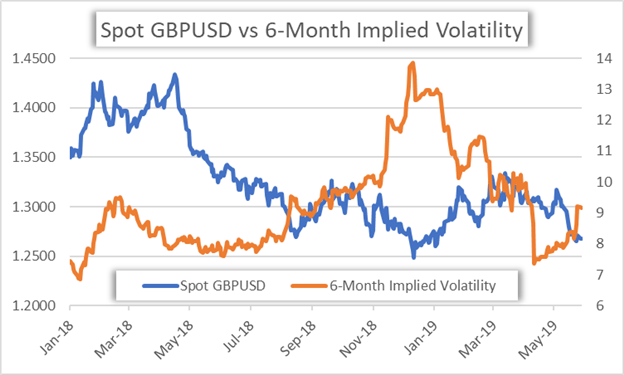 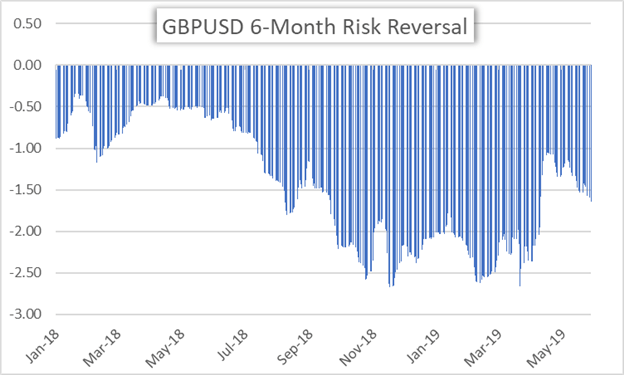 Heighted uncertainty surrounding the likelihood that the UK will leave the EU with a deal by the October 31 departure date has only escalated after the stunning victory by Nigel Farage’s Brexit Party in the European Parliamentary elections. Consequently, GBPUSD implied volatility is on the rise once more and could indicate weakness ahead for the cable. This is further suggested by currency option traders demanding additional downside protection with risk reversal readings plummeting once again. 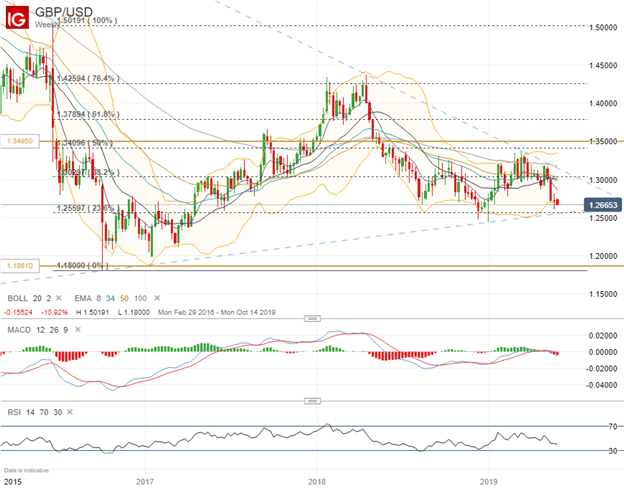 According to the derived implied volatility reading of 9.18 percent, GBPUSD is estimated to range between 1.1851 and 1.3495 over the next 6-months with a 68 percent statistical probability. The Sterling’s recent string of losses has pushed spot GBPUSD towards technical support near the 1.2500 handle, which could provide the British Pound with a level of buoyancy.

Although, if rates fall below this level with the bullish uptrend line and 23.6 percent Fibonacci retracement failing to bolster prices, a clear bearish bias could emerge and quickly push GBPUSD towards 1.2000. This outcome could be driven by currency traders pricing in greater odds of no-deal Brexit. As such, forex market participants will likely focus their attention on who will replace Theresa May as Prime Minister for clues on which Brexit path the UK will be steered down next. 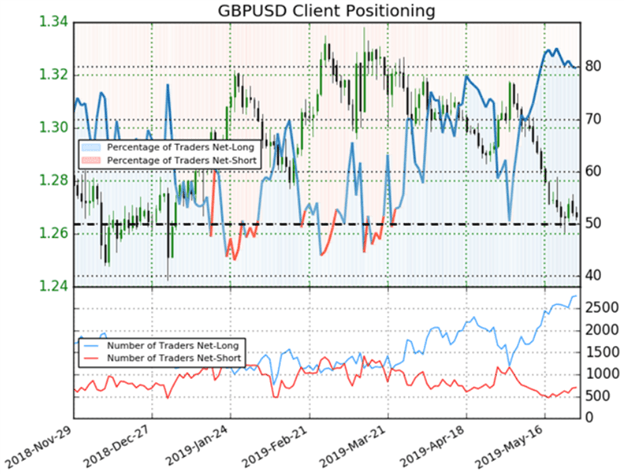 GBPUSD traders remain bullish, however, as IG client positioning data shows that 79.8 percent of retail CFD traders hold net-long positions resulting in a ratio of 3.95 longs-to-shorts. In fact, GBPUSD traders have remained net-long since May 06 when spot rates traded near 1.31714 - prices has moved 3.9 percent lower since then. Looking at trader sentiment data with a contrarian lens, spot GBPUSD could continue to fall considering bullish crowd positioning.