The Swedish Krona and Norwegian Krone will find themselves at the mercy of local unemployment data and major European event risk. Eurozone PMI, German IFO business climate surveys and GDP will be market-disrupting data to monitor, particularly for Nordic economies. Between 70 percent-80 percent of all of Sweden’s and Norway’s exports head to the EU.

Germany – the so-called “steam engine of Europe” – is a major Eurozone economy Nordic policymakers monitor because of the implications it has on regional growth prospects. Today is also the beginning of the European parliamentary elections, a continent-wide vote where Europeans will cast their ballot and express their true happiness – or discontent – with the 60-year project.

Eurosceptic parties are projected to make unprecedented gains, leading to concerns about whether the functional integrity of the EU will be able to endure such a radical ideological re-alignment. Key regulatory parameters on budget deficits and external trade policy may be at the mercy of a less liberally-minded legislature.

The impact on regional growth may cool economic activity and hurt export-driven economies and sentiment-linked currencies like the Krona and Krone. The latter will be particularly vulnerable if global sentiment wanes because of the Norwegian economy’s reliance on the petroleum sector. Crude oil prices are at the mercy of oscillations in global sentiment, and the European elections may be a catalyst for global risk aversion.

Souring sentiment may be further compounded by underwhelming Eurozone PMI data. While economic performance out of the EU has been improving, European growth is far from comforting. The ECB meeting minutes will also provide greater insight into how officials feel about the outlook, and what impact Europe’s changing political landscape will have on monetary policy in the future.

Riksbank officials have repeatedly cited Brexit as a major concern for Swedish growth prospects. The most recent developments offer little comfort to investors and policymakers around the world. Prime Minister Theresa May has come under greater pressure to step down from her post amid dissatisfaction within her own party of her handling of the UK-EU divorce. GBPUSD is teetering on the edge of breaking below key support.

Having May step down would only introduce more uncertainty into an already-complex equation that no policymaker can seem to solve. Having a different Prime Minister with an unknown agenda may only increase the probability of a no-deal Brexit. Were the UK to crash out of the EU, the economic reverberations would not be solely contained to Europe but would ripple across global financial markets.

In Sweden and Norway, unemployment data will likely show weakness after both economies broadly underperformed in April. Crude oil prices broke below major support that month and have since struggled to regain upward momentum. As a sentiment-linked commodity, crude oil prices strongly respond to changes in global risk appetite, and the Norwegian economy’s reliance on the petroleum sector leaves its currency exposed to this same risk.

For months, Sweden’s economic performance relative to expectations has been dismal. If the unemployment rate comes in worse than expected, it would fall in line with the country’s broader trend of overall weakness. The Swedish Krona may even fall if the unemployment rate comes in at 6.9 percent, that would still leave it at its highest point since 2018. 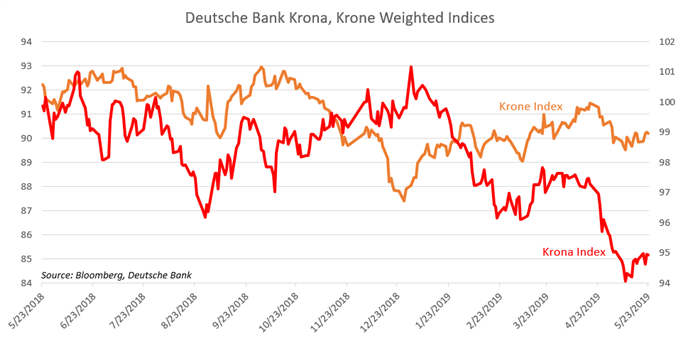