BRL and the benchmark Ibovespa equity index will be closely watching the five-day negotiations between Brazilian Vice President Hamilton Mourao and high-level Chinese officials. Hamilton is expected to meet with General Secretary of the Communist Party of China Xi Jinping. Brazil-China relations have somewhat deteriorated ever since Jair Bolsonaro became President.

“The Chinese can buy in Brazil, but they can’t buy Brazil”, said Bolsonaro. Most of his appointees have a military background, and as such, are hesitant to have close ties with a country that potentially poses a security threat. This comes against the backdrop of greater scrutiny over potential security threats posed by Chinese tech giant Huawei.

Both China and Brazil are major players in the emerging market association known as BRICS – Brazil, Russia, India, China and South Africa. China is also Brazil’s largest trading partner and the biggest consumer of Brazilian iron ore. Brazil may also soon replace the US as China’s biggest client of imported soybean products due to Beijing’s tariff imposition on US-based soybean crops.

Brazil-China tensions have already somewhat softened after officials in Sao Paulo stated that they will no longer seek WTO intervention on China’s policies on sugar tariffs. The concession was likely a gesture of good faith ahead of this week’s talks and may provide a more favorable backdrop to investment negotiations. 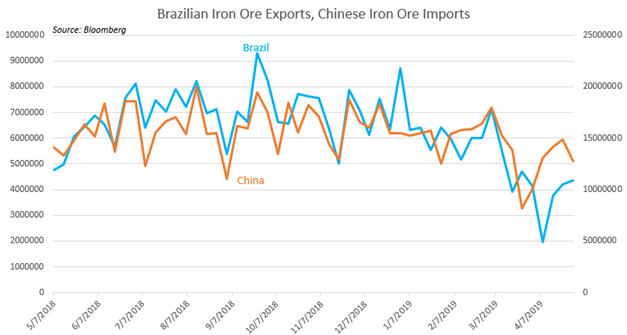 However, the small boon granted from the US-China trade war is outweighed by the cost associated with the economic conflict. As an emerging market economy, Brazilian assets are particularly sensitive to changes in global risk appetite. This reaction will only be amplified as the government attempts to open up Brazil’s economy to the world, making it more in sync – or vulnerable – to changes in global demand.

A few days ago, the Brazilian Economy Ministry cut the country’s GDP forecast for 2019 from 1.6 percent to 2.2 percent. Some of this has to do with the slow progress and uncertain outlook on Bolsonaro’s market-disrupting pension reforms and the implications they have domestic growth prospects. Pessimism over the outcome has led to slower economic activity and reduced the appeal of the Brazilian Real.

USDBRL at its Highest Point Since October 2018 – Daily Chart 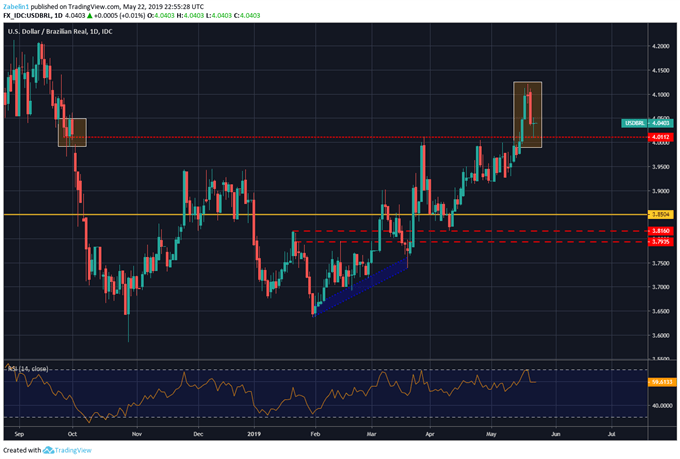 The Ibovespa has been showing some improvement, with futures retesting support after previously breaking through it. While Brazilian markets have been primarily driven by the progress on pension reforms, this market move may have less to do with the structural plans and more with the central bank. If economic data continues to underperform, it may prompt monetary authorities to adjust to a more dovish stance. 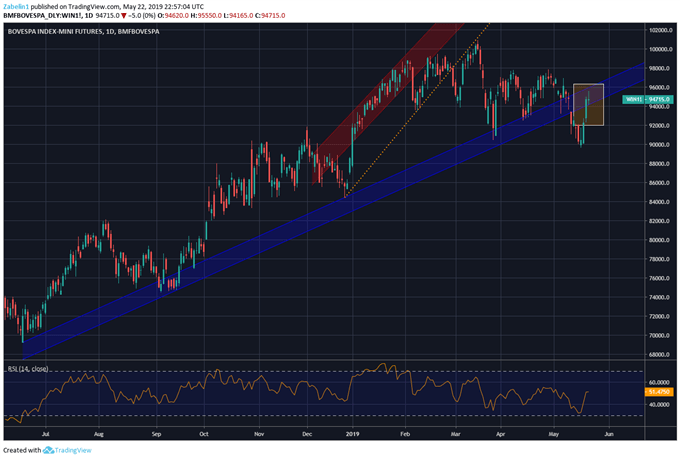 The prospect of cheaper credit may therefore be the leading cause behind the rally in the Ibovespa. Looking ahead, US-China trade relations will persist as a global fundamental headwind and will continue to pressure Brazilian exports. Looking ahead, negotiations between China and Brazil will be crucial to see if a stronger relationship will lead to greater investment that could help lift up Brazilian economic activity.