With trade war tensions and geopolitical themes at large, the less explosive but ever-present theme of monetary policy has momentarily taken the back seat – just a day before Fed minutes are due. While traders will look to tomorrow’s event for an update on the central bank’s policy leanings, some investors have already begun to unwind their riskier allocations as monetary policy constricts – relative to recent years. In turn, some of the loftier valuations on the Street have started to come back to Earth. One such example may be Tesla (TSLA), a pioneer of the electric vehicle space and darling of financial news media. 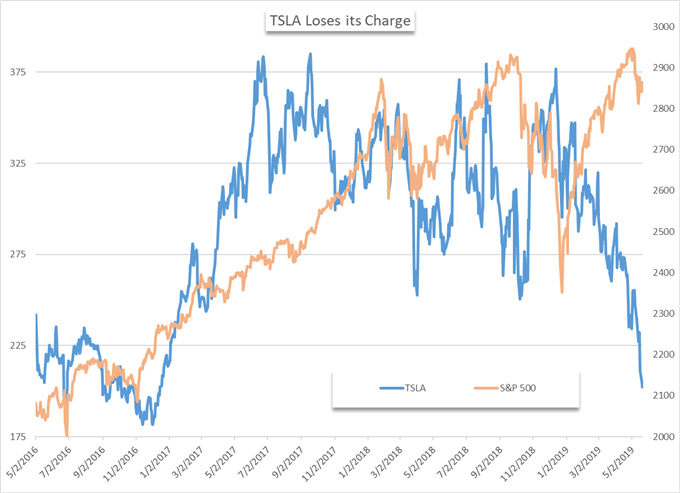 Elon Musk’s Tesla Motors is one of the worst performing stocks on the Nasdaq 100 in the year-to-date, currently 35% lower than it opened on January 2. Shares were pressured further in Tuesday trading after Morgan Stanley analysts said the stock could trade as low as $10. Currently trading near $200, Tesla shares are at their lowest price since mid-December of 2016. In that same span, the S&P 500 has climbed more than 40%.

While many investors have always had underlying concerns regarding the company’s profitability outlook, it seems the current state of the stock market has pushed some speculators past their comfort level. It could be argued the recent Uber IPO is another instance of this shifting sentiment.

In one of the biggest and most anticipated IPOs in recent years, Uber began trading publicly on May 9. Long hailed as an intriguing investment opportunity, the company found few buyers on opening day – trading beneath its opening price. The ride-hailing service has many of the same symptoms as Tesla, uncertain profitability and spending problems. In its prospectus, Uber revealed it loses $1.8 billion a year and may not turn a profit for years to come. That said, the jury is still out on Uber, but the initial signs do not exude signs of confidence.

The lack of demand for these fringe tech-stocks appears to contrast with months and years prior when investors were willing to stomach the heightened risk brought about by their uncertain profitability. Now that quantitative easing is out of the picture and interest rates have crept higher, some market participants now see valuations that were once acceptable as bubble candidates. With many worrying about general market valuation, the “froth” at the top may continue to see pressure – similar to the Tech Bubble in 2001.

Still, there are arguments to be made for the other side. In 2015, Janet Yellen expressed concern of stock market valuations as she left her post as Chairwoman of the Federal Reserve. In an interview with CBS on February 5, 2018 – a day during which the Dow Jones plummeted 666 points - Mrs. Yellen had this to say of the stock market. “Well, I don’t want to say too high. But I do want to say high. Now, is that a bubble or is it too high? And there it’s very hard to tell. But it is a source of some concern that asset valuations are so high.”

Since then, the S&P 500 has climbed 8.15% and the Dow Jones 6.15% - a statistic some market participants may cite to fuel further speculation. That said, headwinds continue to mount the monetary policy conditions are materially tighter. The combination of valuation, waning easing and global economic headwinds have begun to weigh on the most vulnerable and should the trend progress, more established companies in the technology sector may begin to feel pressure.