Australian Dollar Up as Morrison Unexpectedly Triumphs in Election

The Australian Dollar traded sharply higher against its G10 FX counterparts as Prime Minister Scott Morrison unexpectedly clung to power in the country’s federal election over the weekend. The incumbent leader of the Liberal/National coalition even managed to pick up 3 more seats in the legislature.

The opposition Labor party had consistently led in opinion polls ahead of the vote, albeit by a narrow margin. It had proposed an agenda of tilting tax cuts toward lower-earning Australians while increasing the take from higher and more investment-leaning incomes. That was meant to fund an increase in social spending.

For details on what was at stake in Australia’s federal election, see our full preview primer!

The anti-risk Japanese Yen edged lower while the sentiment-geared New Zealand Dollar followed its Aussie cousin upward, though somewhat more timidly. This seems to suggest that the influence of the election outcome has extended beyond domestic markets to boost risk appetite more broadly.

In all, these moves may reflect investors’ relief at not having to deal with yet another uncertainty – a new government with an ambitious agenda – at a time when economic growth is slowing and the US-China trade war rages on. These worries remain of course, which may limit scope for follow-through. 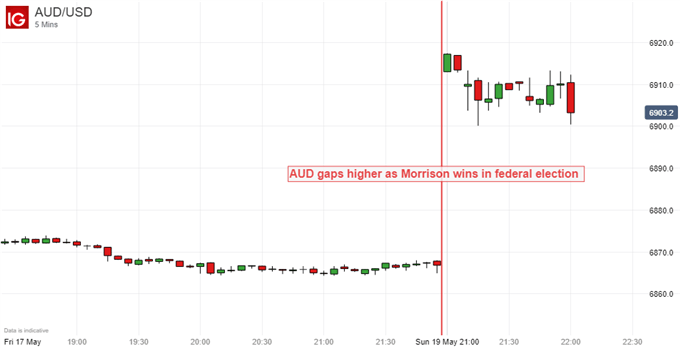