Gold’s price outlook hangs in the balance after a series of trade war developments have removed some of the precious metal’s safe-haven appeal. After disappointing US data, risk-assets initially began Wednesday’s New York session in the red until a series of optimistic trade war comments crossed the news wires. Subsequent sentiment flipped and higher-yielding assets like the DAX 30 and Dow Jones rallied into the green. 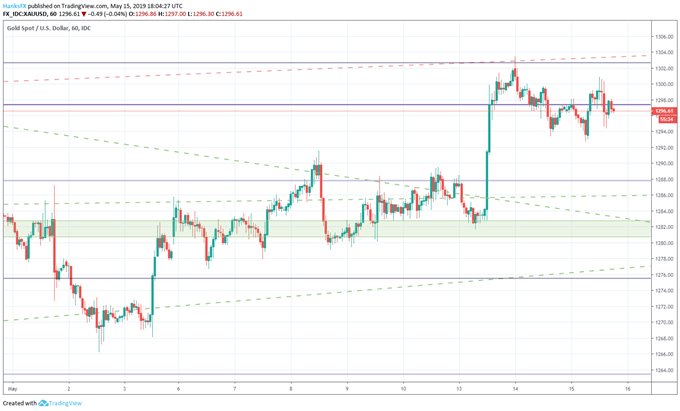 Amid all the noise, gold’s initial bid above $1,300 was quickly retraced. Secondarily, the metal’s attempted move above the 23.6% Fib level from lows in December 2015 to the highs in July 2016 was curtailed. A daily close beneath both $1,300 and $1,297 would see each level pose further resistance in upcoming sessions. Beyond that, the 23.6% Fib level from August 2018 to February 2019 will look to resist a more concerted effort higher.

As for support, XAUUSD will look to $1,287 – the 61.8% retracement derived from the downtrend which took place from January 2018 to August 2018. Subsequent support may be offered from the ascending trendline from lows in January and the descending trendline from gold’s high in February. The confluence of technical levels is displayed in part by the price indecision of late April and early May. 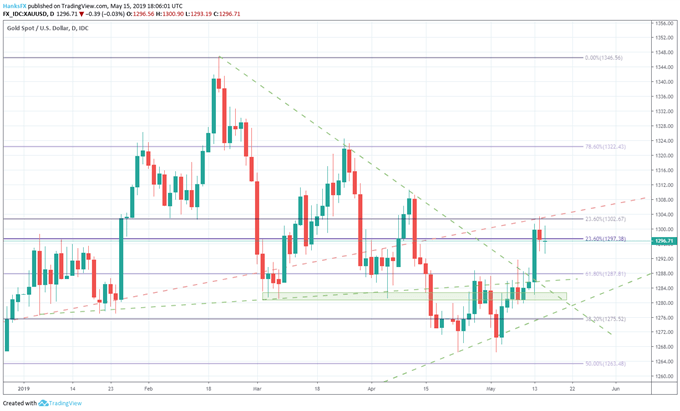 That said, some technical traders view a failed run at the 23.6% Fib level indicative of a trend reversal. Further, if gold’s daily close results in a long-legged doji, which currently exists at the time of this article’s publication, some market participants may expect a bearish follow-through in Thursday trading. Follow @PeterHanksFX on Twitter for updated analysis and technical levels on gold.