The DAX 30 printed a sizable move to the upside during Wednesday’s session following reports that President Trump will delay his decision on whether or not to raise tariffs on auto imports into the United States. Trump is rumored to favor a delay on his verdict for up to 6 months per the Section 232 review process which allows the US to impose taxes (tariffs) on imported goods labeled as a threat to national security.

While markets reacted to the news quite positively, it remains unconfirmed by Trump himself or senior staff members of his administration. Although, speculation has built up in favor of the argument that President Trump is unlikely to wage a trade war on multiple fronts considering the US is already preoccupied with China trade talks breaking down and finalizing the pending USMCA deal with Canada and Mexico. 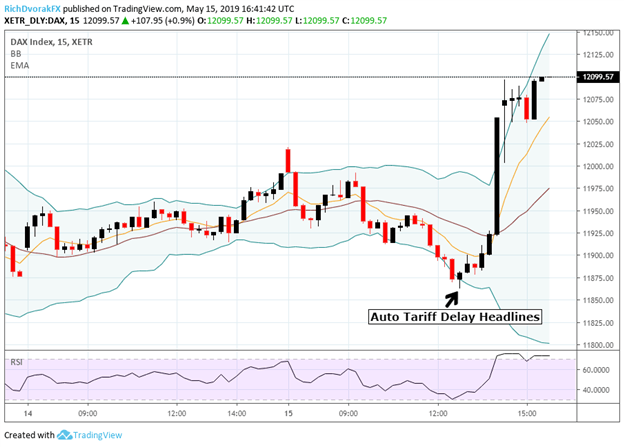 With the US auto tariff threat apparently fading – or at least taking the back seat for now – German auto makers like BMW, Volkswagen and Daimler unsurprisingly spiked higher. Shares in the car companies initially rose 6.6 percent, 5.9 percent and 5.3 percent respectively following the auto tariff delay headlines. Considering these 3 companies comprise roughly 10 percent of the DAX 30 Index and that the US is the EU’s largest market for auto exports, the German stock market soared nearly 2 percent from the 11,875 price level to 12,100. 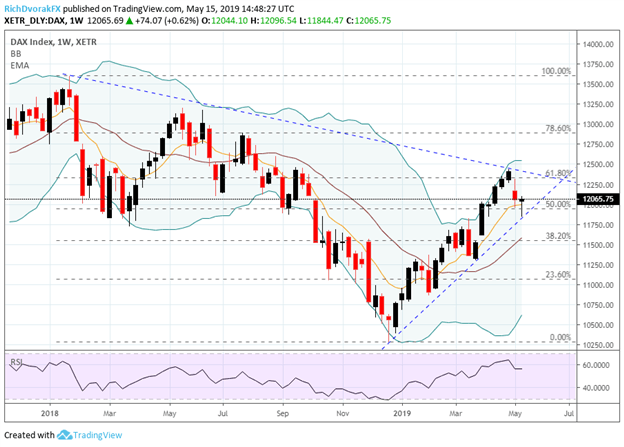 Today’s bounce in the DAX is helping solidify technical support posed by the bullish uptrend formed from the series of higher lows recorded this year. Also, the gains helped the index reclaim the psychological 12,000 price which looks to continue serving as a zone of confluence along the 50 percent retracement level.

With the DAX back above this area, prices could find some footing here and continue higher. However, with the auto tariff delay report still unconfirmed by President Trump in addition to disappointing economic data out of China and the US, speculative winds have the potential of turning into a “buy the rumor sell the news” scenario.