April industrial production rose 5.4% on the year, much worse than both the 6.5% markets hoped for and the previous month’s 8.5% gain. Retail sales rose 7.2% when investors were looking for 8.6%. Urban fixed asset investment rose 6.1%, just below the 6.4% forecast by economists.

These numbers will perhaps only feed the view that China’s economy is suffering more than the US at present from rising tensions and may spur further worries about capital flight from the world’s second largest national economy. The Australian Dollar can act as the financial markets’ favorite liquid proxy for Chinese performance. It may have done so to some extent on Wednesday after the data, but its slide was quite moderate.

The Australian Dollar was hardly popular before the numbers, however, and their release simply took it back toward the day’s early lows. 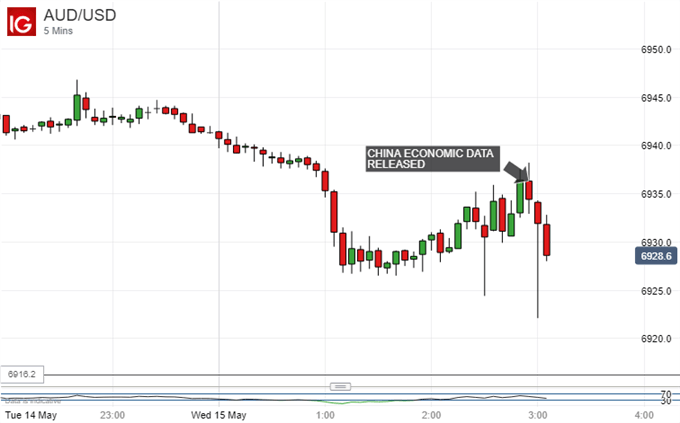 AUD/USD’s daily chart doesn’t make comfortable reading for the bulls though. As a growth-sensitive unit, the currency has been hit hard by worries about further breakdown in trade relations between the two global heavyweights of China and the US.

Moreover, while the Reserve Bank of Australia surprised many by declining to cut interest rates this month, futures markets still reckon that the record low Official Cash Rate of 1.50% will head yet lower. At present two quarter-point cuts are priced in over the coming eighteen months, with the first expected in July. 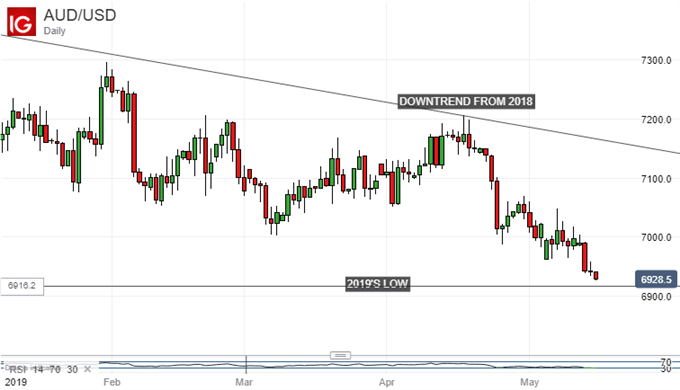 AUD/USD has duly remained well below the downtrend line which has barred the way higher for much of the time since early 2018. As risk appetite has waned this month, the Aussie has approached 2019’s lows. Without a significant revival in global optimism a retest of these seems inevitable.

The market may be on hold, effectively, until Thursday though. Official Australian labor market figures will be released, with markets now well aware of the central bank’s special focus on these numbers when it comes to setting monetary policy.