UK Prime Minister Theresa May looks to be on the verge of abandoning talks between her ruling Conservatives and the opposition Labour Party designed to reach a Brexit compromise acceptable to a majority of members of the UK Parliament.

According to reports, senior Conservatives are urging her to end the discussions, while the pressure on her to resign as Prime Minister is also intensifying. After Monday’s fall in GBPUSD below the 1.30 level in late afternoon trading in Europe, that could mean further weakness ahead. 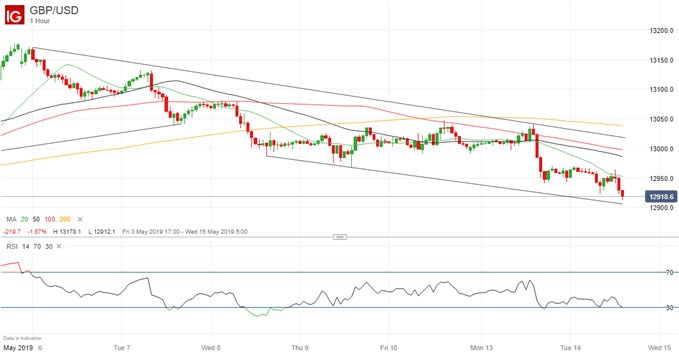 DailyFX poll: Corbyn could be best successor to PM May for GBP

As the chart above shows, GBPUSD has been trending lower since the beginning of last week and, for technical analysts, an obvious first target is the April 29 low at 1.2865. However, below that, there is little further support ahead of February 14’s 1.2773 low.

There is a warning signal too from the IG client sentiment data. The figures, which show how retail traders are positioned, show 70.8% of traders are net-long, with the ratio of traders long to short at 2.43 to 1. In fact, traders have remained net-long since May 6, when GBPUSD traded near 1.3092; the price has moved 1.1% lower since then. The number of traders net-long is 7.8% higher than yesterday and 24.8% higher from last week, while the number of traders net-short is 4.1% higher than yesterday but 26.5% lower from last week.

At DailyFX, we typically take a contrarian view to crowd sentiment, and the fact traders are net-long suggests GBPUSD prices may continue to fall. Traders are further net-long than yesterday and last week, and the combination of current sentiment and recent changes gives us a stronger GBPUSD-bearish contrarian trading bias. 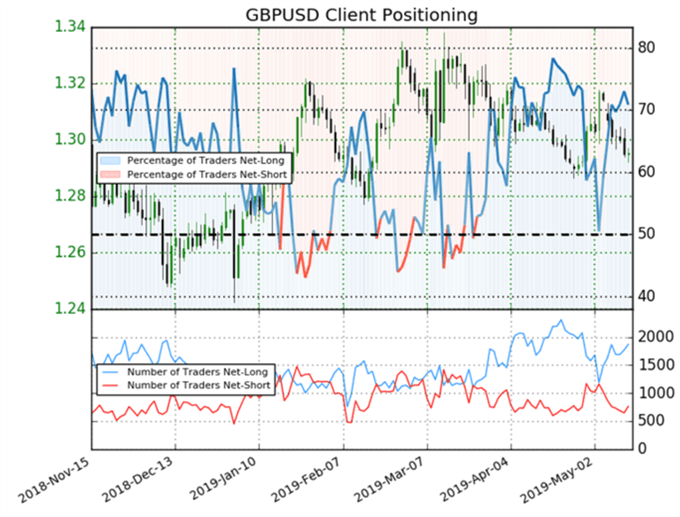 You can learn more about how to use the sentiment data by listening in to my weekly webinars every Wednesday at 1130 GMT. You can sign up for all our webinars here