The Brazilian Real and benchmark equity index had a rude awakening at the start of this week when news crossed the wires that US-China trade relations had further decayed following last week’s fallout. Global equity markets and risk-oriented FX assets – like the Australian and New Zealand Dollars – also took a pounding as Beijing and Washington gear up for economic war. 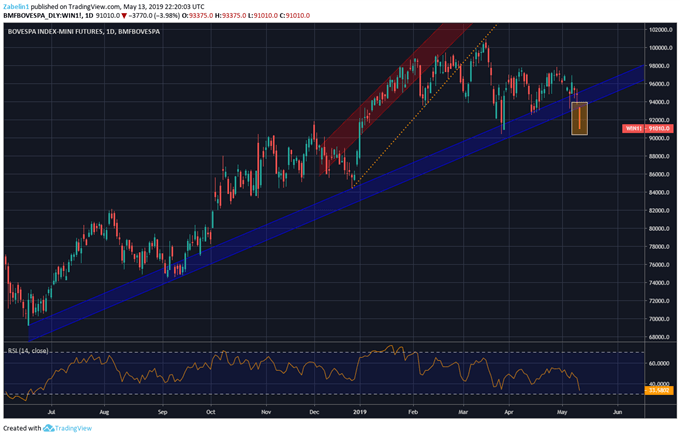 Ibovespa futures gapped lower at the start of Monday’s trading session as an unfavorable global backdrop weighs on the fragile economy. The prospect of slower growth out of China will likely pressure Brazil’s massive iron industry as demand out of Asia weakens. Brazilian soybean farmers may get a boon from souring US-China trade relations but this marginal benefit will likely be outweighed by the costs from the conflict.

Adding to the risk docket is the upcoming release of the Brazilian central bank’s meeting minutes. The publication will likely contain a detailed outlook of what was seen in last week’s policy meeting. Growth in the economy continues to show weakness, though symmetric inflationary pressure has allowed the monetary authority to remain neutral.

However, this could be threatened if economic activity is further slowed by the trade war. President Jair Bolsonaro’s pension reform continues to drive local financial markets, though external factors may now play a greater role. The lower house special commission will have a few more hearings and may release a report on the pension reforms by the end of the month at the earliest.

If the global outlook continues to sour as the US and China continue to wage economic war, USD/BRL may retest the 7-month high at around 4.0000. Amid greater risk aversion, investors may shift their trading strategy from chasing yields to preserving capital. The US Dollar’s unparalleled liquidity may serve as a lightning rod for investors that are seeking an island in a sea of uncertainty. 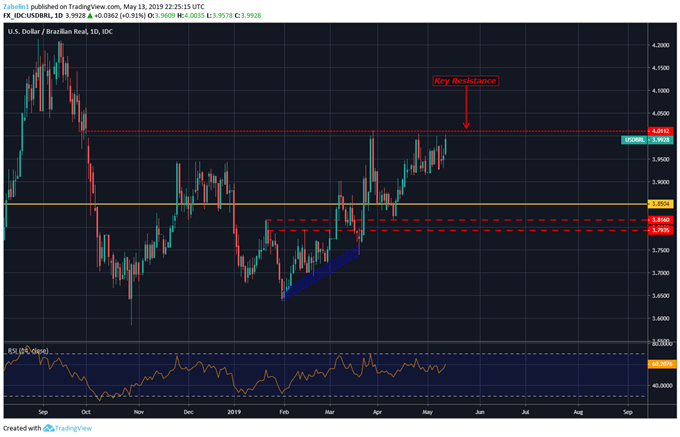