The New Zealand Dollar initially declined as much as 1.20% after the RBNZ cut rates to 1.50% from 1.75% as anticipated. This was the first cut since November 2016. Heading into the announcement, markets were becoming increasingly certain of a cut to the RBNZ official cash rate and the central bank has been trying to prepare the markets for such an outcome.

Back in March, the RBNZ clearly expressed its dovish bias as it noted that risks to the outlook had increased. It was not in vain, since then we have had disappointing first quarter New Zealand inflation and jobs data. The regional Citi economic surprise index has been heading negative lately. This shows domestic economic data tending to underperform relative to economists’ expectations.

Looking at what the central bank said today, the RBNZ noted that inflation is expected to rise slowly. The rate cut was seen as necessary to support overall employment conditions and meeting the CPI target. Meanwhile, the RBNZ said that an important downside for risk is a larger-than-expected slowdown in global economic growth.

Speaking of which, these past few days have witnessed a revival in US-China trade war fears. A deal between the two economic powerhouses is looking less likely after US President Donald Trump expressed his displeasure with the pace of negotiations. This was followed by a threat to raise tariffs on roughly $200b in Chinese imports from 10% to 25% come Friday.

With that in mind, the VIX volatility index has recently surged higher as the S&P 500 and Dow Jones experienced their worst days since March. Concerns over a breakdown in US-China trade talks is a downside risk for the sentiment-oriented Kiwi Dollar and may end up extending declines. A delegation team from China is still scheduled to arrive on Thursday for continued negotiations. 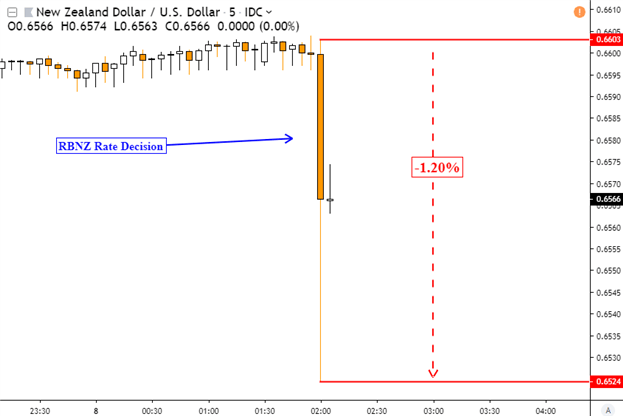 Taking a closer look at the NZD/USD daily chart, we can see that it is attempting to extend the dominant downtrend since the previous RBNZ rate decision. This is defined by the descending channel (blue lines). Support appears to be on the verge of being taken out under 0.6592 which would open the door to testing 0.6501. You can follow me on Twitter for the latest updates on NZD here at @ddubrovskyFX. 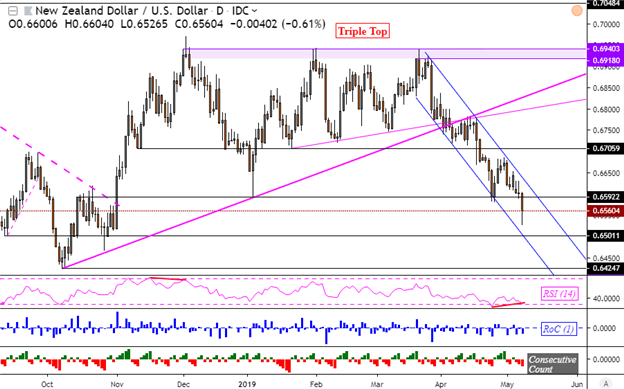 Meanwhile, on the next chart below, trader positioning warns of a bearish NZD/USD contrarian trading bias. Traders are further net-long than yesterday and last week. If you would like to learn more about how to use sentiment as a compliment to fundamental and technical analysis, join me each week as I uncover the prevailing trends in markets. 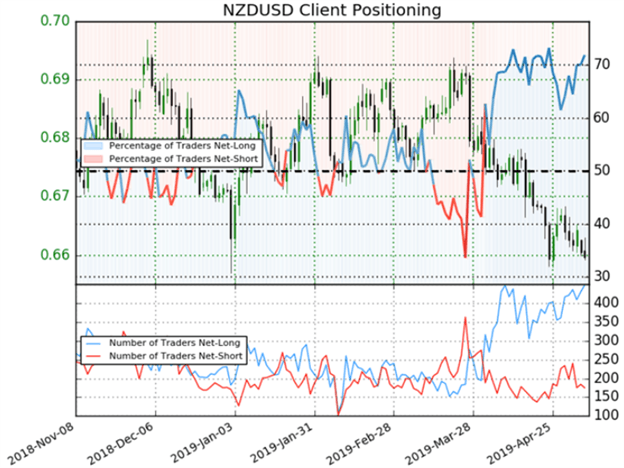