GBP: The Pound is the notable underperformer across the board with GBPUSD testing 1.3000 support. Much of the weakness had stemmed from reports that talks between the government and the Labour party are looking set to fail, which in turn reduces the likelihood that the Brexit deadlock will be broken anytime soon. Alongside this, the pressure continues to mount for Theresa May to announce her departure plans by today or face the risk of being ousted (potentially via the 1922 committee altering leadership election rules). As such, with the risks of PM May being replaced rising, pressure remains on the downside for the Pound and given that the most likely alternatives according to betting markets are potentially a harder Brexiteer than PM May (see here) upside seems limited for GBP. Key support situated at 1.2890.

NZD: The RBNZ lowered interest rates to a record low 1.5% overnight in what was a 50/50 rate decision. The Kiwi came under significant pressure initially, hitting a low of 0.6530 before retracing much of the losses. While the central bank opened the further easing, the decision itself had been based on the consensus of the committee and not unanimous, while the RBNZ Governor noted that the outlook going forward looks more balanced than prior to the meeting, raising questions as to whether this is a one and done cut. Nonetheless with the risk environment is continuing to deteriorate amid the rising US/China trade tensions, which in turn keeps the Kiwi on the backfoot.

EUR: The Euro has been relatively steady throughout the session, oscillating around the 1.12 handle as EURGBP buying keeps the currency supported. Elsewhere, German Industrial output had surprised to the upside (0.5% vs. Exp. -0.5%) which in turn boosted sentiment for the Euro. However, with the overhang of rising trade tensions between the US and China, gains have been somewhat marginal for the Euro.

Gold: As the trade tensions continue to weigh on equity markets, gold prices have been among the beneficiaries with the precious metal making a break above $1287 (61.8% Fibonacci retracement) to test the descending trendline from the 2019 peak. Source reports this morning noted that China had backtracked on much of the legal issues throughout the text of proposed US trade agreement. However, despite this, the general consensus is that an agreement will be reached in the near-term. 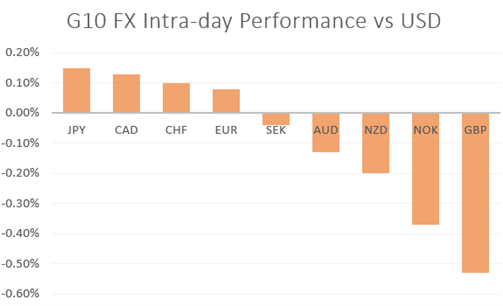