Asia Pacific stock markets were already under pressure from trade worries and, perhaps surprisingly, didn’t get much weaker Wednesday after the release of Chinese export numbers which wilted far below expectations.

The country’s overall trade surplus came in at $13.84 billion, way below the $35 billion markets were looking for on average. Dollar-denominated exports slipped 2.7% on the year, but there was better news from the import sector which showed a 4% rise.

Local mainboards were already down before this data, however, tracking losses on Wall Street which came in turn as investors mulled what looked like increased tensions between Washington and Beijing over trade. Overall markets seem to have become less certain than they were that some sort of trade settlement will be reached this month, even if hope is far from lost. China’s Vice Premier Lie He is still reportedly bound for US talks this week, despite some talk earlier this week that he may not attend.

JP Morgan Chase CEO Jamie Dimon told Bloomberg Television Wednesday that he thinks the chance of a deal this month is 80%.

Stocks struggled against that US headwind in any case, though. The Nikkei 225 shed 1.7% with all other major bourses lower too, if not by quite as much. Australia’s ASX 200 was 0.4% down as its close loomed and the Shanghai Composite was off by 0.1%.

The New Zealand Dollar slipped on news that the Reserve Bank of New Zealand had cut its key Official Cash Rate by a quarter point to 1.50%. This is a new record low and puts NZ rates at parity with those of Australia. The RBNZ noted the exceptional risks now attendant on all policy choices thanks to rising global economic uncertainties but felt that a cut was the best move.

NZD/USD has been under bear pressure since mid-March, and the RBNZ’s action saw it slide below its previous lows for 2019. 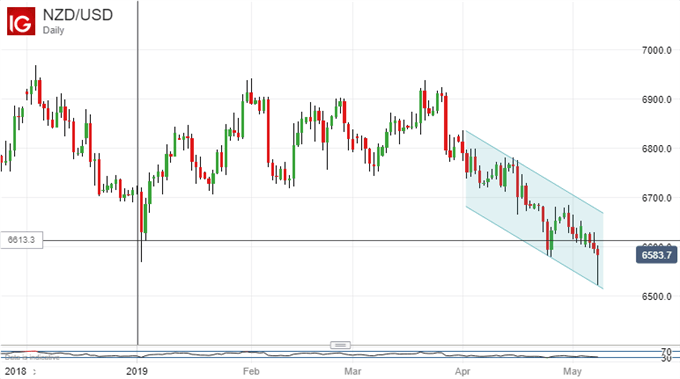 Further falls will see October 2018’s lows in the 0.6417 region coming back into focus.

Elsewhere the Japanese Yen was in vogue, attracting the haven bids usual when risk appetite is weak. USD/JPY is now down to lows not seen since late March. Gold prices also got a boost, while Crude oil held firm, underpinned despite worries about demand by US sanctions against Venezuela and Iran.

The rest of the global session doesn’t offer huge prospects in terms of scheduled economic data but it’s not entirely without interest. European Central Bank President Mario Draghi will speak in Frankfurt and the US Department of Energy will release crude oil inventory numbers.