The Australian Dollar gained sharply this week after the Reserve Bank of Australia left its key Official Cash Rate on hold at the record low of 1.50% which has been in place since late 2016. Could global trade politics have played a major part in this surprise? 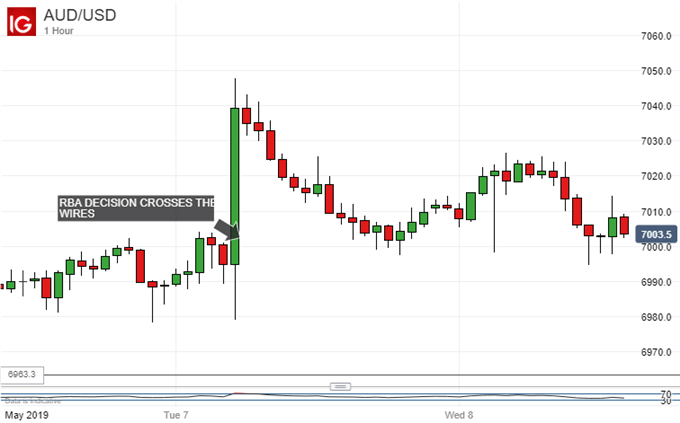 The runup to the meeting saw the chance of a cut priced as high as 70%, before retreating to around 50% just before the call. Explaining its decision the RBA focused on its domestic labor market, long a bright spot in a patchy economy. It said that gradual wage growth seemed likely to stoke inflation, meaning that current monetary settings remained appropriate.

And who knows? Inflation might well be stoked as the RBA forecasts. However, it’s not too cynical to note that inflation remains stubbornly below the RBA’s target (and decelerating) as it has been for most of the time since early 2015. Job creation has been broadly strong all the while so, if it were really going to make its presence felt in the consumer price figures, might it not have already done so?

It’s notable also that the Australian interest-rate futures curve still prices in two OCR cuts over the next eighteen months. Investors there seem not to share the RBA’s convictions.

Perhaps the labor market was not in fact the only thing which stayed the RBA’s hand this week. Markets went into May reasonably certain that they’d see a durable trade settlement between China and the US before the month ended.

Trade Deal Hopes Were High Before The RBA Decision

That optimism may have faded somewhat in recent days, but the US/China trade story may well have been influential for the RBA nonetheless. A deal would almost certainly see growth-sensitive assets such as the Australian Dollar soar. Indeed, as a sometime liquid China market proxy the Aussie might well see some of the biggest gains.

One channel through which interest rate cuts might stoke inflation is via a weaker currency. So how likely is it that the RBA might seriously entertain its first reduction for nearly three years in the same month that the arguably pre-eminent global market risk event could threaten to negate its currency-weakening effects?

You might very well argue that the Reserve Bank of New Zealand did just that this week. After all, it cut its own rates the day after the RBA held fire. But the RBNZ’s focus is probably much more domestic than the RBA’s. There’s a pressing need to shore up New Zealand business confidence, for example. This may have overwhelmed currency considerations which weighed more heavily on the RBA.

Australian Dollar investors might be well advised to see how the trade story plays out this month before considering interest-rate cuts too far off the table.