A new increase in trade tensions between China and the US took a heavy toll on regional stock markets Monday.

US President Donald Trump threatened further tariff barriers against Chinese goods on Friday, apparently frustrated by the slow pace of negotiations scheduled to resume in Washington this week. China for its part has reportedly threatened to cancel talks altogether in response.

International markets had been optimistic that May could see a deal finally inked between the two global heavyweights. It is impossible to know how much brinkmanship is entailed by this latest apparent deterioration in relations, but that optimism has certainly receded.

Crude oil prices also fell as investors worried about demand levels in a world without a trade deal. This impetus was strong enough to overcome the rising geopolitical temperature in the Middle East. Washington has dispatched a carrier strike group and other attack aircraft to the region to increase deterrence pressure on Iran.

The Shanghai mainboard was down more than 5% in the afternoon, with Australia’s ASX 200 down by nearly 1%. The Sydney benchmark has retreated noticeably from its April peaks, but there seems no sign yet of any nervous selling pressure and the index remains comfortably above the psychologically crucial 6000 mark. 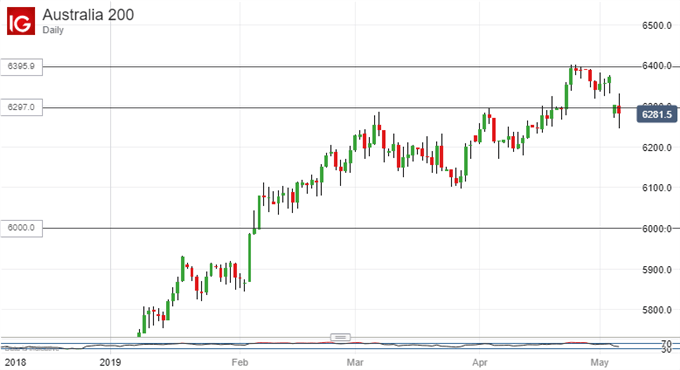 The index is now flirting with the highs of early April, which now come in as support. Below them the last significant low, from late March, will be eyed. It comes in in the 6100 region.

Japanese markets remain closed for an extended holiday break. Growth sensitive currencies like the Australian Dollar were unwanted at the expense of more countercyclical plays like the Japanese Yen. European markets may well lack volume with London out for a break of its own.

Monday’s remaining economic data schedule is rather thinly populated. Various Purchasing Managers Index numbers will be coming from around Europe, but that is about it. The main Asian data release came in the form of one of these, from China’s private service sector. It performed quite well last month but in so doing highlighted the disparity between it and the still-struggling manufacturing sphere which of course stands to be hit even harder if no trade deal can be struck.