Alongside a few key tech companies, US retailers have highlighted the adverse impact from a strong US Dollar in their first quarter earnings. According to FactSet, concerns around a strong Dollar have only increased from the quarter prior, and the trend could be set to continue if Greenback strength persists. 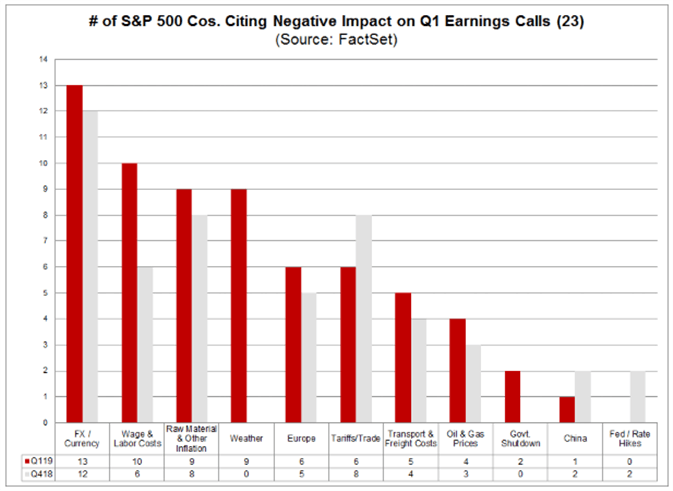 At the company level, Nike is one retailer that has highlighted headwinds due to foreign exchange rates. “It is important to note that we expect roughly 6 points of FX headwindsin Q4 which would result in low single-digit reported revenue growth. As you may recall in Q4 of last year, we delivered 8% currency-neutral revenue growth with 13% reported revenue growth” Nike CFO Andy Campion said on their March 21, third quarter earnings call.

While Nike warned of an FX headwind as their 2019 fiscal year concludes, the 2020 outlook was more optimistic. “We also see the disparity between currency-neutral and reported revenue growth peaking in Q4 before narrowing significantly as we enter fiscal year 2020 based on current FX rates. As a result, we currently expect the FX headwind on reported revenue to largely dissipate as we enter fiscal year 2020” Mr. Campion continued. Interestingly, Nike’s FX outlook contrasts with that of Google’s which warned of a stronger Dollar in the coming months.

Elsewhere, Hanes Brands had similar findings on the state of FX. “Adverse foreign currency exchange rates for the year are expected to reduce net sales as reported by approximately $115 million compared with last year, up from previous expectations of approximately $60 million” read a company filing of their first quarter earnings – released today. Despite the headwind, Hanes was able to deliver results above expectations – but saw its stock price falter after it revealed a bad debt charge from Heritage Sportswear.

Like Nike and Hanes, VF Corporation, which owns US brands like Vans, the North Face and Timberland also noted a strong Dollar. In their most recent earnings report, VF financial statements reveal the company’s profit was reduced by $681,000 due to currency headwinds – compared to a profit of $737,000 in the year prior. While the $1.5 million swing is unlikely to make or break VF Corporation, it demonstrates the impact of Dollar strength on corporate profits over time.

Unlike FX, US corporations seem to be coming to terms with tariffs and trade wars. Compared to 4Q 2018, fewer firms have thus far warned of adverse impacts from the ongoing economic conflicts. On Thursday, conflicting statements came out of official Chinese media and the Commerce Department of the United States. While the former said the talks may have reached an impasse, the latter was optimistic a deal was near. The two sides will meet again in Washington next week for further talks. 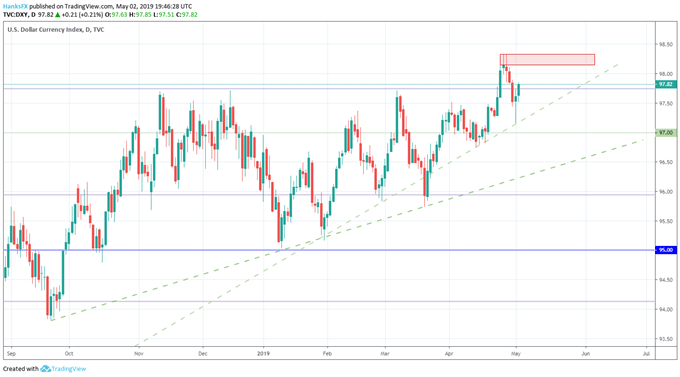 With May’s FOMC decision in the rearview, it will now look to Friday’s release of US Non-Farm Payroll data for guidance. As for the S&P 500, a key technical break and a neutral Fed could mark troubled times ahead. For a deeper look at the S&P 500, Dow Jones and Nasdaq 100 join my equity webinar on Friday.