The Swedish Krona and local two-year bond yields plunged following the release of the Riksbank’s decision to hold the benchmark rate at -0.25 percent and continue its accommodative policy – as anticipated. Central bank Governor Stefan Ingves announced that the next rate hike will either be at the tail end of 2019 or beginning of 2020. He also alluded to an extension of the bond purchasing program until December 2020.

Ingves stated that unemployment has bottomed out and that the Swedish economy has entered into a “calmer phase” with expectations of inflation reaching close to the Riksbank’s two percent target. However, underlying upward pressure is weak, particularly against the backdrop of slower global growth and rising trade tensions between the US and China, Japan and the EU.

Despite dismissing the probability of a global downturn ahead, the uncertainty over Brexit is a growing concern because of its unknown political and economic consequences. This comes as economies in Europe slow down with the ECB turning to new stimulus methods while it struggles to emerge out of negative rate territory.

As an export-driven economy with a heavy reliance on healthy demand out of Europe, waning growth in the EU is a major concern for Swedish policymakers. Indeed, this is particularly so in light of key Eurozone member states showing an alarming amount of weakness. The IMF cut global growth forecasts again – in large part due to ongoing trade wars – leaving less external demand for Swedish goods and undermining the country’s exports.

The Riksbank’s decision to push back its tightening cycle is part of a broader trend of almost all major central banks pushing back their hiking trajectory in light of growing uncertainty. The Norges Bank is an exception to this – but perhaps not for long. With still so much potential risk in the latter half of the year laying dormant, there is no telling of how the various factors push central banks to delay rate hike expectations further.

Later today, Swedish retail sales and producer prices data are scheduled to be released, though its impact on the Krona may be relatively muted following the Riksbank meeting. Looking ahead, next week is filled with major event risk out of Europe against the backdrop of US trade negotiations. Keeping an eye on these factors will be prudent because of the impact it may have on further delaying the central bank’s tightening cycle. 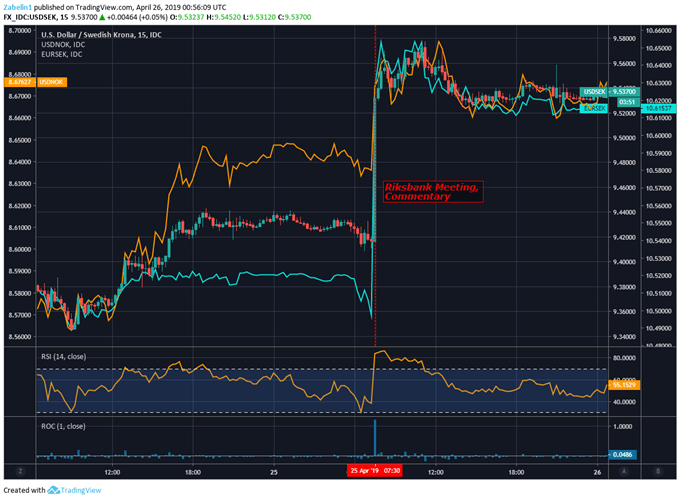