The Dow Jones steered lower on Wednesday after upbeat earnings from Boeing (BA) were unable to drag the index higher and recoup losses from other constituents like Caterpillar (CAT). Although Boeing missed on revenue figures, the stock’s price climbed – suggesting analysts were expecting worse as the 737 Max 8 issue continues. Consequently, Boeing announced it has abandoned its 2019 financial forecasts as it deals with the aftermath of two deadly crashes.

Conversely, Caterpillar weighed on the index after warning of strong competition in China and questionable demand in the rest of Asia. The negative outlook seemingly overwhelmed the impact from strong revenue and EPS, both of which beat out analyst expectations. Unlike Caterpillar, the tech giants Facebook (FB) and Microsoft (MSFT) delivered reassuring results after the closing bell.

Facebook beat on all fronts. Apart from the financials, daily and monthly active users came in above expectations and sent the stock 4% higher immediately after the data was released. The company reported $1.89 earnings per share on $15.08 billion in revenue compared to expectations of $1.63 and $14.97 billion respectively. Despite a possible $3 to $5 billion Dollar fine from the FTC regarding privacy, investors were eager to gain exposure to the social media giant.

Not to be outdone, the world’s second largest public company also outperformed Street estimates. Microsoft reported $1.14 EPS on $30.6 billion in revenue and traded nearly 2.5% higher. The stellar performance from both tech giants should spur bullish momentum for the broader Nasdaq and S&P 500 in Thursday trading.

As for future reports, option traders are expecting relatively muted price action for Intel (INTC), even after recent earnings from Texas Instruments (TXN) suggested that the semi-conductor sector may not be out of a cyclical downturn. Intel’s report should offer further insight into the matter when they report after Thursday's close. 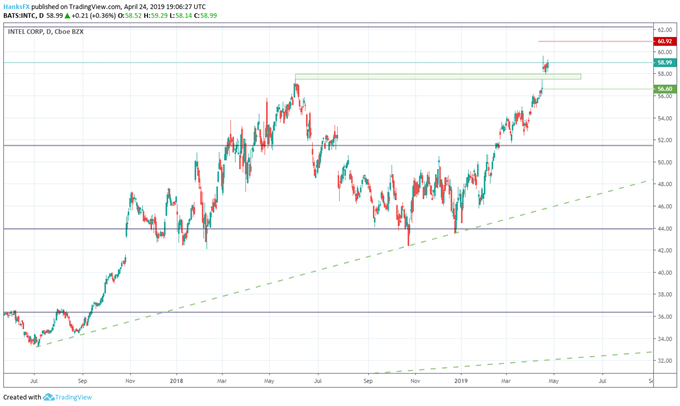 That said, implied volatility for INTC in the weeks to follow is noteworthy at 15.6%. Price action in the days to come could see Intel test the 78.6% Fib level - from the stock’s high in 2000 to its low in 2009. While $62.24 is outside the 1-day implied volatility, it is comfortably within the 20-day implied range and would mark the first resistance level in an attempt higher.

For support, INTC will look to the swing high from June at $57.48 which also marks the high on April 16. The level is well within the implied price range and would likely come into play should earnings disappoint. 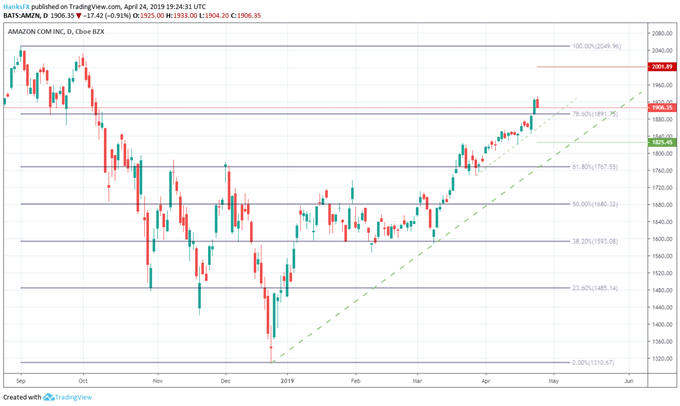 Alongside INTC, FAANG member Amazon will offer their fiscal findings. The online-retailer has a 1-day implied volatility of 4.6% which could see it break beneath both the 78.6% Fib level at $1,891 and short-term trendline support around $1,875. From a technical perspective, the topside looks to be the path of least resistance with the next Fib level at $2,049 – outside of the 1-day implied volatility.

Although other notable quarterly reports are due Friday, the broader S&P 500 and Dow Jones will likely look to US GDP to drive price action. As earnings season progresses, follow @PeterHanksFX on Twitter for equity insight.