With the S&P 500 and Nasdaq closing at all-time highs, the Dow Jones has some catching up to do. In need of a catalyst, first quarter earnings from companies that are responsible for considerable weight in the Industrial Average may provide the required spark.

Boeing, which is responsible for nearly 10% of the Dow Jones' weighting, is slated to report earnings on Wednesday before market open. The company has found itself under fire in a fledgling US-EU trade war as it simultaneously grapples with a catastrophic technical malfunction in select models of its aircraft. It should come as no surprise that Boeing shares have dragged on the Dow. In turn, the company has seen its influence and correlation with the broader index slip. 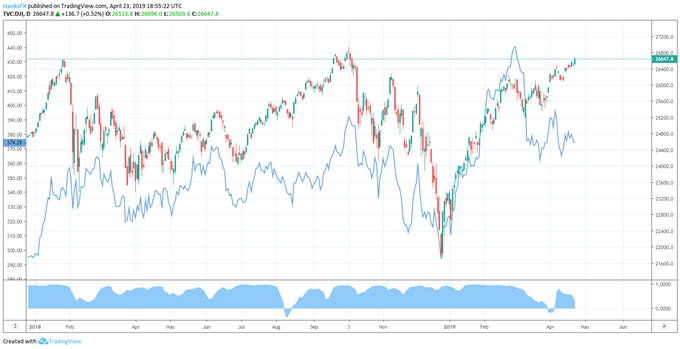 Also listed on the Dow Jones, Caterpillar (CAT) will report before the opening bell. The company is often viewed as a barometer for global growth and any insight into the state of the global economy will be heavily sought ahead of the first print of US GDP on Friday. Together, the two components are responsible for 13.25% of the Average.

The tech-heavy Nasdaq will in turn evaluate earnings from its own heavyweight components, and the world’s second-largest public company by market capitalization will lead the charge. Given its size, Microsoft has the lowest implied volatility – of the companies highlighted in this article - heading into tomorrow’s release. Further, implied volatility in the coming weeks suggests price action will remain relatively tame. That said, Microsoft will have considerable influence over broader earnings season sentiment – with particular sway in the tech sector.

Alongside Microsoft, FAANG member Facebook will also report first quarter earnings tomorrow after market close. The two companies are the second and fifth highest weighted members on the Nasdaq and account for over 15% of the index. In contrast with Microsoft, Mark Zuckerberg’s Facebook boasts the highest implied volatility ahead of earnings with an expected price range of $171 to $196 following the report.

Potential Impact on the S&P 500

After solid earnings drove the S&P 500 to all-time highs in Tuesday trading, fuel for continuation will be needed. Tomorrow’s post-earnings price action could make or break the case for higher-highs with Boeing, Caterpillar, Microsoft and Facebook responsible for roughly 6.85% of the broader index’s price. 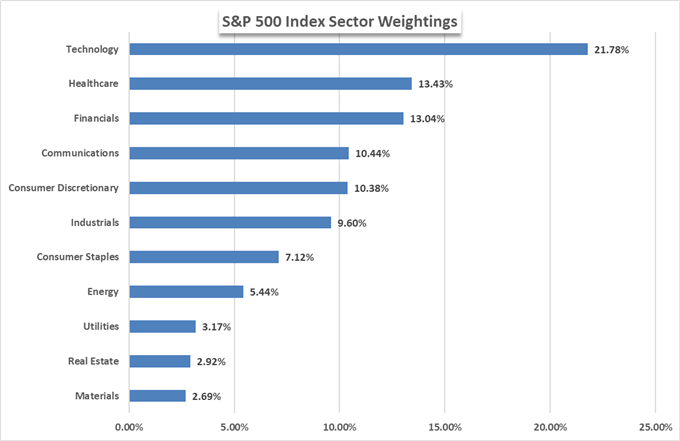 Apart from the four corporations highlighted in this report, nearly 200 other companies will release their earnings on Wednesday. Outside of the names with a heightened impact on sentiment, Tesla, Visa and AT&T are some other high profile stocks due fiscal updates. For insight on these reports, follow @PeterHanksFX on Twitter.