The Swedish Krona and Norwegian Krone plunged following yesterday’s release of Sweden’s unemployment rate. Unemployment passed the 6.6 percent forecast and clocked in at 7.1 percent, the highest level since June. USDSEK spiked over one percent, the highest one-day jump since March 22. However, the pair’s rise was constrained by the 9.2273-9.3110 range and failed to close above critical resistance.

Given that Sweden’s economic activity has been underperforming relative to economists’ expectations for a few months now, the rise in unemployment falls in-line with the broad trend in economic performance. It also says that analysts have perhaps been overly optimistic about Sweden’s outlook. Certainly, policymakers at the Riksbank would fit this description due to the incongruence of their inflation models with the actual results.

Officials at the central bank intend on raising rates in the latter half of 2019 with eyes on a hike in September. Overnight index swaps show that market participants believe that there is a 24.4 percent probability of a hike at the July meeting with a zero percent chance of a cut. The recent uptick in rate hike expectations could be due to recent ambiguously-hawkish commentary from Deputy Governor Martin Floden.

However, given that inflation still remains below the two percent target and global growth is showing increasing weakness, it is difficult to see on what leg the Riksbank can stand on when it comes to a hike. Growth in the EU – Sweden’s largest trading partner and key export destination – has been lackluster as illustrated by the most recent data releases out of Germany and the Eurozone.

On April 25, the Riksbank will be announcing its rate decision which will likely be followed by commentary from key officials. It is not likely that the central bank will hike rates given that underlying economic performance shows that the economy may not be able to endure a state of tightened credit. However, prolonged accommodative policy can also create bloated equities and rising household indebtedness; among other issues. 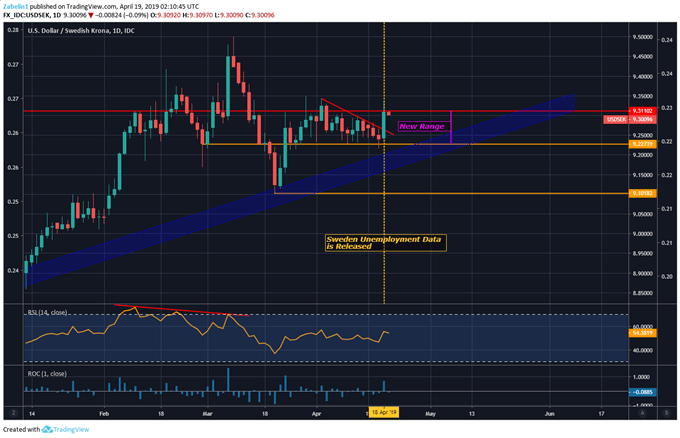