Markit Economics released their monthly Purchasing Managers Index readings this morning for the service and manufacturing sectors. The Services PMI came in at 52.9 which missed analyst estimates of 55.0, which are largely attributed to purchasing managers revising their output expectations lower for the year and slower growth in employment. New business was also lower with it being the softest increase since March 2017.

The soft marks in the service sector follow weak numbers in consumer spending to start the year which coupled with continued weakness in the Service PMI could stoke fears that consumers are losing their appetite to spend, however some fears could be eased by this morning’s stronger than expected retail sales - mainly attributed to strength in the auto sector.

The manufacturing PMI reading was 52.4 which missed estimates and went unchanged from last month’s reading. This was the weakest improvement in the manufacturing sector since June 2017. Improved indicators for output and new orders were offset from slowing increases in employment and pre-production inventories according to purchasing managers.

There was also an increase in new business, with the best reading in three months. However, compared to the same period last year, the increase is somewhat underwhelming. Inflation pressure eased across the sector with input prices declining for the sixth consecutive month, but survey participants noted that small increases in cost are generally being passed on to their clients. 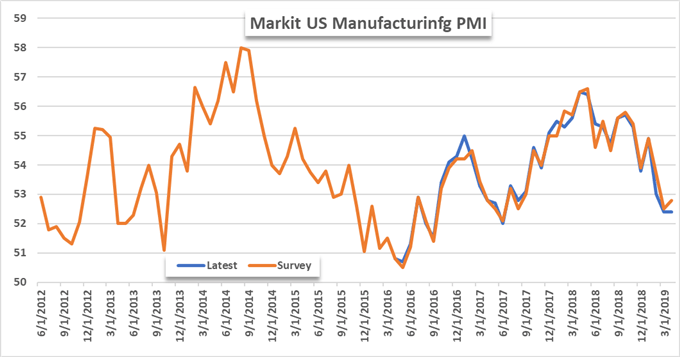 The data from Markit puts the U.S. economy at its weakest growth since 2016 in relation to manufacturing and services, with hiring and output being the main sources for the slowdown. It appears weak manufacturing in the first quarter has started to bleed into April. The easing of inflation pressure on prices for manufactures has reduced pricing power which, coupled with weaker demand, could cause continued downward pressure into the rest of the second quarter.