The FOMC meeting minutes showed that the majority of policymakers viewed the current risks facing the national and global economy were legitimate enough to warrant a hold on rates throughout the rest of 2019. However, the meeting minutes also suggested that policymakers were still in a wait-and-see mode and are still willing to raise rates once the outlook domestically and globally becomes clearer.

As expected, the ECB held rates and reinforced the pessimistic outlook for inflation it had in the March 7 meeting which sent shockwaves into global markets and USD/SEK to a 17-year high. The central bank recently introduced new liquidity provisions as a way stimulate the economy since lowering rates beyond their negative status may not provide an adequate boost.

Adding to the European docket was Brexit. UK and EU and lawmakers met today and agreed on an extension until October 31st following a check-in on June 30th. However, this means that the UK may have to participate in the upcoming European Parliamentary elections, an outcome Theresa May and hardcore Brexiteers were hoping to avoid. Despite the respite, the possibility of a no-deal Brexit still remains a regional and global risk.

In Norway, local CPI data outperformed relative to economists’ forecasts – as anticipated. This led to the Norwegian Krone rising roughly one percent against the US Dollar and outperformed against its European and Nordic peers. This could give impetus for the Norges Bank to raise rates again this year in June, assuming crude oil prices remain sufficiently high enough to bolster the Norwegian economy.

Looking ahead, the Swedish Krona will be eyeing tomorrow’s cascade of CPI data. Local inflation reports have been showing greater weakness as global growth and European demand has been waning and putting pressure on the Krona. If you’re interested in learning more about EU-Nordic relations, see my Krona Krone 2019 forecast.

Riksbank officials have recognized that inflationary pressure appears to be on the downside, but recently alluded to greater flexibility in monetary policy. Overnight index swaps on rate hike probabilities have since risen on the ambiguous hawkish rhetoric from Deputy Governor Martin Floden. Policymakers will now be eyeing tomorrow’s report and taking it into consideration at the next policy meeting on April 25. 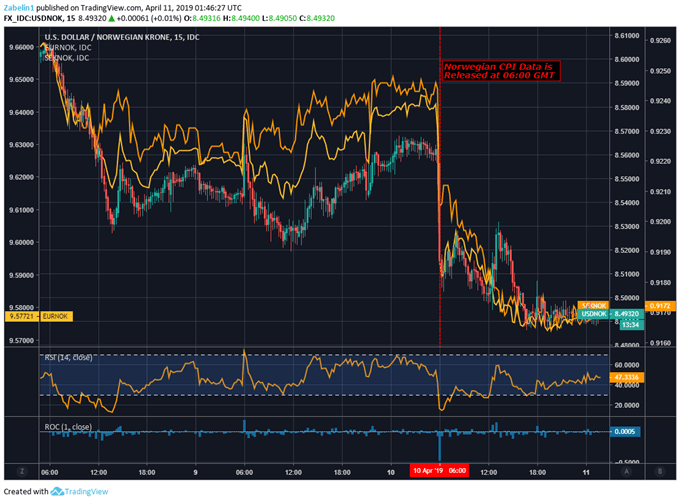