A couple of fundamental developments were competing for market attention after the S&P 500 only just closed 0.1% to the upside beforehand. On the upside, multinational conglomerate Sony received a boost after hedge fund Third Point was reported building a stake in the company.

On the flipside, rising concerns about a EU-US trade war momentarily sent equities lower in a moment of risk aversion. Looking at currencies, the anti-risk Japanese Yen gained and held onto its progress despite a slight uptick in sentiment towards Tokyo Stock Exchange close.

The pro-risk Australian and New Zealand Dollars eventually found support. However, risk appetite may be vulnerable to the upcoming IMF/World Bank Spring meeting which could highlight the prolonged uncertainty about the outlook for global growth. Technical developments in German shares also hint that sentiment may sour next, S&P 500 futures are pointing narrowly lower.

On a daily chart below and looking at futures to show afterhours trade, the DAX may be on the verge of topping. That is because prices have left behind an Evening Star at the recent peak above 12000. Confirming a turn lower would however require further closes to the downside where support seems to be at 11838. 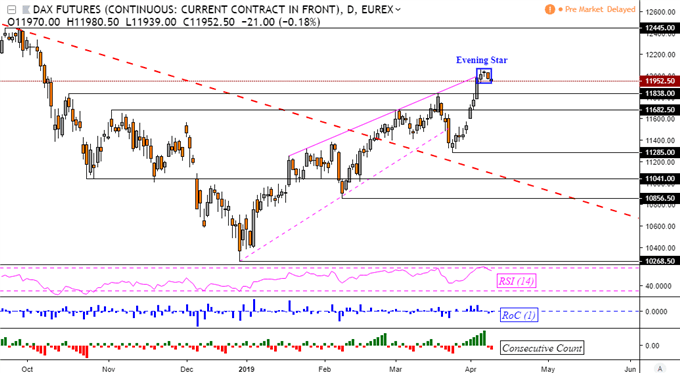