Crude Oil: As oil prices continue to push higher with Brent crude futures above $71/bbl, oil prices continue to move into President Trump’s tweeting zone. Libyan fighting continues to keep oil underpinned, while strikes Pernis refinery has also added to the lift. Elsewhere, the spread WTI/Brent spread has continued to narrow with WTI now trading at a $6.60 discount having received a lift following the latest Genscape cushing data. As a reminder, near-term risks for oil come in the form of tonight’s API crude report after market. That said, as the oil waiver expiration draws closer (set to expire early May), India has followed Japan in halting their purchases of Iranian as they await the US administration’s decision as to whether they will extend current waivers.

GBP: Choppy price action in the Pound this morning as gains stemming from reports suggesting that Merkel could propose a 5yr time limit to the backstop had been pared after Germany refuted these rumours. All eyes are on for tomorrow’s EU summit; however, the question is as to whether a Brexit extension will lead to a rally in the Pound. As the latest COT report show that GBP positioning is relatively neutral, a short squeeze may not see GBPUSD break above 1.33 resistance.

EUR: The Euro has been somewhat range bound this morning and may continue to do so given the heavy supply of option expiries keeping the currency contained. Elsewhere, President Trump announced that the US will impose $11bln worth of tariffs on the EU in relation to Airbus subsidies, which in turn has seen the EU prepare to retaliate. EU/US trade war risk on the rise? 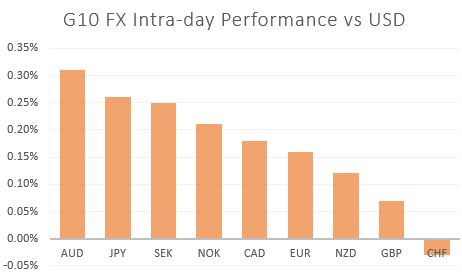